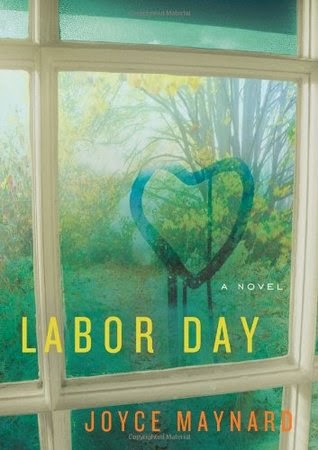 
Book summary: As the end of summer approaches and a long, hot Labor Day weekend looms, the life of lonely thirteen-year-old Henry Wheeler is irrevocably changed when he and his emotionally fragile mother show kindness to a stranger with a terrible secret.


In a manner evoking Ian McEwan's "Atonement" and Nick Hornby's "About a Boy," acclaimed author Joyce Maynard weaves a beautiful, poignant tale of love, sex, adolescence, and devastating treachery as seen through the eyes of a young teenage boy--and the man he later becomes--looking back at an unexpected encounter that begins one single long, hot, life-altering weekend.


My Thoughts:  This is a fantastic book.  It’s the second book I’ve read by Joyce Maynard, the first being her most recent, After Her.  As soon as I read After Her, I wanted to read another book by Joyce Maynard because her prose style and story lines are so addictive.  Labor Day has been on my list of books to read for a long time so it was a natural choice to read it next.  I’ve read some wonderful reviews of Labor Day and I wanted to read the book before the movie came out because I find nine times out of ten, the book is better!  I wasn’t at all disappointed with Labor Day, being even better than I’d hoped or expected.  I didn’t want to be finished reading it because I was enjoying it so much.  However, the extremely satisfying end helped cushion that let down one feels at the conclusion of a great book.


Labor Day is quiet and introspective.  A grown up Henry is the narrator, relaying what happened in his life during the 6 day Labor Day weekend when he was 13 years old.  Henry is more mature than a lot of boys his age but is also naïve, socially awkward and unpopular.  He doesn’t really have any friends, spending his free time at home with Adele, his divorced mother.  He is the only company she’s had since her divorce.  She doesn’t like to leave the house and spends most of her time inside.  When Henry isn’t keeping his mother company and Adele isn’t delivering one of her daily monologues to Henry, he spends his time either watching TV or thinking about girls and sex, of which he knows little but wants to know more.


Henry cajoles Adele into taking him out to the store for things he needs for the upcoming new school year.  She reluctantly drives Henry to the local five-and-dime, Pricemart, just before Labor Day.  Henry is thirteen.  While Henry is browsing he’s approached by Frank, an adult, who’s a loner and physically injured.  He’s bleeding from his leg and his head.   As such he requests Henry’s help.  Surprisingly, Henry’s able to convince Adele to give Frank a ride.  The surprises continue as Adele allows Frank to come home with her and Henry. Adele even fixes Frank’s injured leg and the cut on his head.


Adele doesn’t seem concerned with where Frank’s come from or who he is.  She makes it clear to Frank that her only concern is for Henry’s safety and well-being.  Frank assures her Henry is completely safe.  It slowly becomes clear that there’s a real connection between Adele and Frank.  Henry relays how Frank and Adele seem to communicate silently with looks and gestures. Frank understands the importance of Henry’s place in Adele’s life and has no interest in coming between them.  Frank is enthusiastic towards Henry. He wants to spend time with him, too.  He wants to teach Henry to throw a baseball.


Frank breathes life into Adele and Henry’s world.  He cooks rather than just heating up TV dinners. He’s able to fix things around the house.  He knows how to bake a pie and he teaches Henry the proper way to do so. Adele and Henry see Frank for the person he truly is and trust him.  The most important think Frank does is release Henry from being his mother’s companion. Frank wants to be the one to care for Adele. Henry can feel the burden leaving him and that feeling manifests itself physically. He can breathe easier now that he knows he’s not responsible for his mother’s happiness.  What a burden for a thirteen-year old boy!


Joyce Maynard’s characters, particularly Henry, are terrific.  They’re quiet and contemplative and they feel real. There’s nothing false about them: they’re just lonely, alone and looking to connect with someone.  I felt the author’s connection to Adele and Henry.  She trusts them and believes in them.  The book isn’t autobiographical, according to Maynard, but after reading a few interviews with her, it’s undeniable there’s at least a little bit of her in Adele, the divorced, lonely mother. It explains her interesting and quirky character and how well created she is.   Although I personally didn’t feel very connected to Adele or Henry, I sympathized with them, particularly Henry.  The poor kid doesn’t have a chance at fitting in with a mother whose happiness he feels is his responsibility.  Growing up is tough enough without such a burden.


Did Maynard create Henry because she had a son (or daughter) in a similar situation?  If she did, perhaps this is a way now to reach out to him and explain herself, as well as let him know that now she understands what he must have gone through.  If not, then she is an author with vivid imagination and amazing creative abilities, not that they have to be mutually exclusive.  Frank’s origin is something we can only guess at.  Perhaps he was created as a necessary catalyst to propel the story forward, born in a flash of inspiration.  In any event, his character is a testimony to Maynard’s great story telling. Labor Day is a unique and creative story about love, family, believing in others and loyalty.  It’s beautifully written with ingenious characters and a fascinating plot.  It’s a book I highly recommend and believe it would be a shame for anyone to miss reading it.