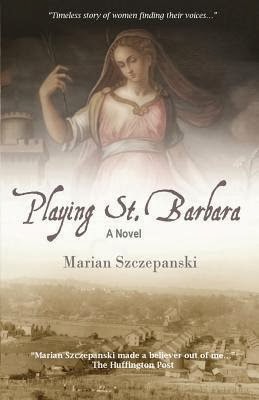 
Book Summary:   The secrets, struggles, and self-redemption of a Depression-era coal miner's wife and three daughters play out against a turbulent historical backdrop of Ku Klux Klan intimidation and the 1933 Pennsylvania Mine War. Their intertwined lives eerily mirror the 7th century legend of St. Barbara, patroness of miners, reenacted annually in the town pageant. Tested by scandal, heartbreak, and tragedy, each woman will write her own courageous ending to St. Barbara's story.


My Thoughts:  This book is well written, intense and thoughtful.   The characters, though fully developed, have lives so foreign to me I am unable to relate to them.  Since they are, however, so seemingly real, with struggles I couldn’t imagine facing, I couldn’t help but feel sympathetic.  There were times I wanted to step in and help them,  if only I could.


Playing St. Barbara is the dark, somber story about the Sweeney Family, told from the viewpoints of the family’s mother, Clare, and the older daughters, Deidre, Katie and Norah.   Fin Sweeney, a heavy drinker with a violent streak, is the tyrannical head of the family.  He works in the coal mines which are dangerous, frightening places to work.  There are several coal miner deaths due to accidents every year.


The women are afraid of Fin but they also stand up to him.  Fin physically abuses Clare every day.  He wants a son so, when he returns home nightly, drunk from the pub, he forces himself on Clare.  The following day, she does whatever she can to guarantee a miscarriage.  She doesn’t want Fin to have a son who would be under Fin’s influence.  It’s bad enough she’s had to watch, helplessly, as he abused his daughters over the years.


Though the book is very well written, intricate and realistic, I personally found it difficult to get through because it’s so bleak.  Often I try to find in the author’s voice a message in their story, whether it’s one of hope or maybe redemption through suffering.  I was hard pressed to find anything like that here.  It takes some doing but an argument could be made that there is a testament to the human spirit.  The women try to live on the most basic levels of survival, but that means accepting the violence as a fact of life.  Rather than breaking free of it, it seems the best Clare can hope for is a miscarriage to keep Fin from being able to terrorize another innocent victim.  If Clare gets caught by Fin, there’s little doubt he’d kill her.  This is why I found it so hard to take anything positive away from the book.  At every turn there’s a dead end with violent consequences, and the Sisyphean nature of the women’s lives, having to face the same fate day in and day out left me depressed.


The book’s title refers to an annual play put on by the high school.  St. Barbara is the patron saint of miners.  There is redemption in St. Barbara’s story, but for me this just adds to the frustration because there is no parallel between the play and the lives of the women in the story. If anything, it serves to add to the chasm between real life and what the women could ever hope for.   Deirdre, the second oldest daughter, did marry but it was against her father’s wishes.  Even her marriage was dangerous and sacrificial:  she needed her mother’s help to keep her father from preventing it, knowing that the steps he would’ve taken would have been extreme.   And now that she is married, she is alienated from her family and the only contact she has with them is if they visit her.  She even has a son, and it goes without saying that he will never meet his grandfather.  Even events that should seem joyful have to be shrouded in secrecy and fraught with fear.

It’s difficult to say I enjoyed this book but I found it interesting. I don’t like happy endings with everything tied up neatly with a big red bow.  But I also prefer more than a continuation of the same bleakness and despair with which the book began.  The problem here seemed to be that Deidre, Katie and Norah weren’t satisfied with the lives they made for themselves. Deidre’s discovered that marriage to Billy, who loves her and whom she loves, and a house filled with children isn’t as satisfactory as she imagined.  Deidre seems to want a career or a job like Norah. Basically, Deidre wants it all. Katie’s not completely happy in the convent. She may wish she married Jack after all, it's hard to say.  But both women have a life better than Clare has had despite any struggles they face.  It would be nice if they showed some appreciation for their lives. 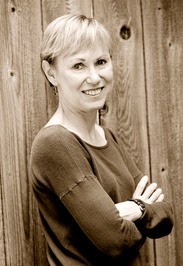 The granddaughter of immigrant coal miners, Marian Szczepanski grew up in southwestern Pennsylvania and lived as a young child in the Jamison Coal Company house where her mother and aunts were raised. She holds an MFA in fiction from the Program for Writers at Warren Wilson College and has won awards for short fiction and magazine feature writing. Playing St. Barbara is her first novel. She lives in Houston, Texas.