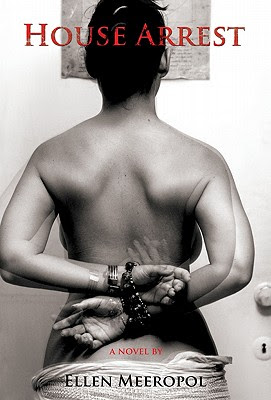 Summary: Home-care nurse Emily Klein can’t get out of her new assignment – weekly prenatal visits to Pippa Glenning, a young cult member under house arrest for the death of her daughter during a Solstice ceremony. But Emily takes her work seriously and plays by the rules. She is determined to take good care of her high-profile and unconventional patient.
With two other cult members in prison, Pippa Glenning struggles to keep the household intact. If she follows the rules of her house arrest, she may be allowed to keep her baby; but as the pregnant woman in the family it’s her duty to dance for Isis at the upcoming winter Solstice ceremony. To escape the house arrest without being caught, Pippa needs Emily’s help.
Set in Springfield, Massachusetts and in Maine, and told from the alternating points of view of four characters, House Arrest questions the necessity of breaking rules to serve justice.

My Thoughts: Ellen Meeropol’s debut book, House Arrest, is a captivating and touching story of one woman’s struggle to make peace with her past: to forgive her parents for the hurt they caused as well as herself, for childish misunderstandings she believed were facts and has shaped her life around.

Emily Klein, the main character, has shaped her life and beliefs in response to the deep pain she experiences as a result of a family tragedy when she was a young child. Although unaware of what really happened and never happy, Emily buried the past and refused to look for answers to the questions that have troubled her for years. But when Pippa Glenning, her young patient who is pregnant and under house arrest, enters Emily’s life and asks for her help, Emily can no longer ignore her past. She needs to understand her parents’ behavior if she wants to figure out why she is considering violating everything she has believed for so long to help one young woman.

Ms. Meeropol’s story contains well-rounded and intriguing characters who seem familiar from our own lives. Particularly when we discover that, like all of us, they too have short-comings. Sam, for instance, is a great father to seven-year old Zoe, who has spina bifida. Yet Emily doesn’t completely trust him because he left her cousin, Anna, before Zoe was born because Sam couldn’t imagine life with a disabled child. But he came back, not to Anna, but to be there for his daughter. Ms. Meeropol’s characters engage in believable dialogue that also keeps the story moving at a consistent pace.


Pippa is the other character of focus. Her house arrest status is disturbing to Emily as it causes her to think about her childhood and parents too much. Emily narrates much of the story, although a few of the other characters, such as Pippa and Sam, get some chapters of their own. But the other characters’ chapters are voiced by an omniscient narrator. This technique renders the story Emily’s. At the same time it provides us the backgrounds of other characters and their experiences while serving to emphasize and highlight Emily’s. She is the one facing a dilemma but it takes her time to acknowledge that she’s held on to the past for too long and needs to stop living in fear of the truth. As the story progresses, the suspense builds. We wait with eager anticipation to see what Emily decides to do. But even when it seems she’s made her decision, her conviction wavers.

Emily’s job as a home-care nurse with its attendant issues is drawn from the author’s own experience and passion for nursing and medical ethics. Emily loves her job as a nurse and she’s good at it. Emily displays a lot of empathy for her patients, which is one reason I strongly identified with her. I’ve had a lot of experience with nurses and the good ones are to be treasured. Ironically, her interest in her patients and her loyalty to them is precisely why Emily considers taking action diametrically opposed to the ethics of her profession, which she takes very seriously. She realizes that some things may be more important than rules and laws.

Pippa is a very different character than Emily. We see the difference between Pippa and Emily’s lives before they intersect and what’s made them who they are now. She’s strong where Emily is unsure; secure in herself where Emily doubts and fears everything; content where Emily is restless. Pippa shows Emily the power of believing in something even when others treat you as if you are crazy. Pippa is a member of Family of Isis cult and isn’t phased by the negative opinion of many in the community. She loves the family aspect of the cult and the members loyalty and love for each other. But Pippa is savvy enough to know there are some problems within the family particularly with the leadership. Unlike Emily, who denies what upsets her and ignores difficult issues, Pippa searches for answers to her questions and confronts the cult members about the issues.

The only problem I had with House Arrest is that the Family of Isis specifically, and the issue of cults generally, fell by the wayside as Emily's story grew in intensity. I was hoping we might learn a little bit more about this cult (and others, in general) and how it had been treated by the community over the years. I expected that Emily and Pippa might have a more open conversation about their practices and beliefs, as well as what Pippa liked and didn’t like about it. Similarly, the tragedy that occurred within the cult ‘family’, which is significant to Pippa's story, is rarely mentioned, let alone discussed after the book’s halfway point. This was disappointing, considering that Emily and Pippa are very much aware of the terrible and painful results caused by bad decisions. Even those with the very best intentions.

Ellen Meeropol’s debut is a compelling and powerful story with universal themes about life and being human. House Arrest is about many things. First, growing-up: leaving the past behind and becoming an adult. It's about discovering, understanding and accepting that our parents are human. They have their own flaws, interests, beliefs and ideas. It’s about figuring out who we are, what we think and believe and acting on that. It's about acknowledging our fears, facing them and moving on. All in all, this book covers a broad spectrum of concepts and real life aspects we all deal with at one point or another: whether it’s love and loss, loyalty, or friendship and family. This is a poignant, smart and inspiring story that I recommend to anyone who enjoys a well-written novel. I look forward to Ellen Meeropol's future books.

Be sure to look up Ellen Meeropol's website and blog.

I was fortunate to win an ARC copy of House Arrest from Rose City Reader.
Posted by Unknown at 11:17 AM