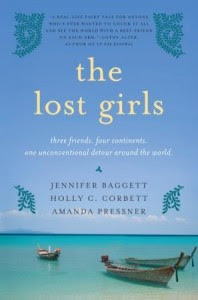 
Publisher's Book Summary: Jen, Holly, and Amanda are at a crossroads. They're feeling the pressure to hit certain milestones—scoring a big promotion, finding a soul mate, having 2.2 kids—before they reach their early thirties. When personal challenges force them to reevaluate their lives, they decide it's now or never to do something daring. Unable to gain perspective in fast-paced Manhattan, the three twenty-somethings quit their coveted media jobs and leave behind their friends, boyfriends, and everything familiar to travel the globe. Dubbing themselves the Lost Girls, they embark on an epic yearlong search for inspiration and direction.

As they journey 60,000 miles across four continents and more than a dozen countries, Jen, Holly, and Amanda step far outside of their comfort zones, embracing every adventure and experience the world has to offer—shooting blowguns with Yagua elders in the Amazon, learning capoeira on the beaches of Brazil, volunteering with preteen girls at a school in rural Kenya, hiking with Hmong villagers in Vietnam, and driving through Australia in a psychedelic camper van. Along the way, the Lost Girls find not only themselves but also a lifelong friendship. Ultimately, theirs is a story of true sisterhood—a bond forged by sharing beds and backpacks, enduring exotic illnesses, fending off aggressive street vendors, trekking across rivers and over mountains, and standing by one another through heartaches, whirlwind romances, and everything in the world in between.

This candid and compelling memoir will speak to anyone who has ever felt the desire to spread her wings and discover the world with her best friends by her side.

My review: A few years after college three friends and I traveled to Ireland for 2 weeks. We visited different towns and counties in South Ireland and spent several days in Dublin. It was a fantastic, fun trip. I've always enjoyed traveling and have always wanted to do more of it. However, it's difficult because I have a host of medical issues, the most hindering being a rare bone and endocrine disease that makes travel more stressful than agreeable. Fortunately, there's no stress in reading about other's travels. When I learned about The Lost Girls I was excited to read it, a book about three women friends traveling around the world together. I was interested in reading about the places they visited and their various experiences and opinions about the cultures, people and sites as well as what they learn about themselves and each other. However, The Lost Girls wasn't quite what I expected. It was more about the authors and some of the life issues they were struggling to figure out, and a little less about their travels. But, as it's labeled a memoir, that makes sense. It was fascinating to read how the many encounters and occurrences impacted each women and changed their perspective on life as their adventure progressed. Overall, The Lost Girls is a captivating and engrossing memoir about three young women in their mid to late 20s and their trip around the world.

The authors, Jen, Holly and Amanda, take turns telling the story in their own chapters, each with their own style. It's interesting to read their experiences in the different countries they visit, starting their trip in Peru. I expected riveting passages about adventures exploring Machu Picchu and other exciting occurrences, particularly because Amanda listed hiking the Inca Trail as one of her dreams on this trip. Instead, many pages in, several of the chapters are taken up with personal issues like Jen's troubled relationship and Amanda's focus on work. It was also surprising that a large amount of their focus in South America, (it’s unclear if they visit only Peru and Brazil, or if they also went to Bolivia) was on nightlife and partying. The first stop in Cusco, Peru, finds the women spending a lot of time in pubs, at festivals and at various parties and the following day nursing their ensuing hangovers. Precious little information is provided about places of cultural interest they visited. In her chapters on the Amazon Jungle in Peru, Jen mentions several of the interesting excursions they have taken so far and wonderful sites the women have seen. Unfortunately, we're not given any real detail. For example, she writes about their visit to Canopy Walkway, one of the longest treetop pathways in the world. She shares about having to traverse fourteen suspension bridges lashed together with steel cables and thick twine to get there, but doesn't tell us about the view or any other related details.

One of the highlights of Jen's chapter on Brazil is about the women's visit with the indigenous Yagua Indian tribe, known for their blowgun hunting. Jen writes about participating in a traditional dance, paying homage to the rain gods and being taught how to use a blowgun. This section was a good example of more of what I hoped to read about in The Lost Girls. The women's visit to Kenya is another instance where we're given more compelling chapters, as Jen, Holly and Amanda immerse us in the details of their activities with young female students. To inspire the girls and let them know they should believe in themselves, the authors write a play for the girls who act it out. The play is based on Wangari Maathai, the first African woman to win the Nobel Peace Prize. She is known as "Tree Mother of Africa" and embodies the spirit of self-empowerment and serves as an inspiration to the young students. Jen wrote earlier in the book she's dreamed about volunteering in Kenya since she was a young girl. Reading about her happiness at the opportunity to bond with the young girls and help them learn about their heritage (they didn’t know who Ms. Maathai, was for example) and help empower them via the message of the play is wonderful. By the time the women left Kenya, they’d learned as much from the young students as they had taught them.

Holly is interested in the culture and lifestyle of the people in the countries she and her friends visit and her chapter about Kenya is one of the most touching. She writes about meeting Sister Freda, as she's called by the locals. Sister Freda has run a clinic for more than ten years for people who cannot afford medical care, relying mainly on donations. Holly was inspired by Sister Freda’s work, and seeing how faith provides the power for some people to make a difference in the world. For example, Holly connects with Esther, a 3-year old girl cared for by Sister Freda. Esther has no father and was abandoned by her mother. Esther refuses to be apart from Holly when she visits Sister Freda. Holly shares the profound impact of not only Esther, but the realization of the many opportunities of her privileged life. She requests and receives permission from Sister Freda to sponsor Esther, assisting with food, clothing, education and anything else the little girl needs.

I found Holly's chapters to be the best overall. She took this trip at least partly to broaden her cultural horizons. She displays an interest in learning about and experiencing the lives of the people in different countries. Her experience learning yoga and meditation at a Shraddha Ashram in India is absorbing while her descriptions of the Killing Fields in Cambodia are particularly potent. I identified more strongly with Holly's interests, rather then the other two women, and completely understood when she expressed a concern that their trip was, and I’m paraphrasing here, in danger of dissolving into a keg-party across the world. Holly was on this trip to have fun but, more so, to push her boundaries and grow by experiencing different cultures and lifestyles. I think I would have shared more with Holly than I would have with Amanda and Jen had I been on this trip. Still, I admire Jen and Amanda’s ability to balance their enjoyment of socializing with experiencing the culture.

After I read the chapters about South America, I was concerned The Lost Girls would be a memoir of the personal lives and troubles of these women, their trip used only as a colorful backdrop. Luckily, the chapters about Kenya, India and beyond proved The Lost Girls to be an engaging narrative. It’s not just about the authors and their friendship, but a detailed account of the countries they visit, citizens (and tourists) they meet, and the times the women shared while experiencing the world. In other words, it’s much more than just a memoir. It is not a small book, coming in at more than 500 pages, filled with amazing adventures, scary situations, entertaining anecdotes, intriguing ideas and inspiring people, including the authors. The Lost Girls is a book worth savoring. It moves at a nice, smooth pace, and is hard to put down. I recommend taking note of the passages you like so you can return to them later, which you'll want to do. The Lost Girls is a book worth reading and I highly recommend it.

For more information about The Lost Girls see their website and blog.

Thank you to TLC Book Tours for the opportunity to read and review The Lost Girls.
Posted by Unknown at 9:17 AM