First Chapter First Paragraph Tuesday Intros is a weekly meme hosted by Diane at Bibliophile by the Sea every Tuesday. To participate share the opening paragraph or two of a book you've decided to read based on the opening. This is an author whose books I‘ve wanted to read for a long time. This is her first novel with many of the themes that often appear in her writing including retribution, religion, redemption and blindness. 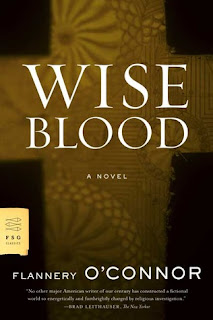 Hazel Motes sat at a forward angle on the green plush train seat, looking one minute at the window as if he might want to jump out of it, and the next down the aisle at the other end of the car. The train was racing through tree tops that fell away at intervals and showed the sun standing, very red, on the edge of the farthest woods. Nearer, the plowed fields curved and faded and the few hogs nosing in the furrows looked like large spotted stones. Mrs. Wally Bee Hitchcock, who was facing Motes in this section, said that she thought the early evening like this was the prettiest time of day and she asked him if he didn’t think so, too. She was a fat woman with pink collars and cuffs and pear-shaped legs that slanted off the train seat and didn’t reach the floor.

He looked at her a second and, without answering, leaned forward and stared down the length of the car again. She turned to see what was back there but all she saw was a child peering around one of the sections and, farther up at the end of the car, the porter opening the closet where the sheets were kept. “I guess you’re going home,” she said, turning back to him again. He didn’t look, to her, much over twenty, but he had a stiff black broad-brimmed hat on his lap, a hat that an elderly country preacher would wear. His suit was a glaring blue and the price tag was still stapled on the sleeve of it.