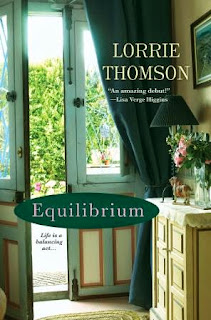 
Book Summary:  In the year since her husband died, Laura Klein’s world has shifted on its axis. It’s not just that she’s raising two children alone—fact is, Laura always did the parenting for both of them. But now her fifteen-year-old daughter, Darcy, is dating a boy with a fast car and faster hands, and thirteen-year-old Troy’s attitude has plummeted along with his voice. Just when she’s resigning herself to a life of worry and selfless support, her charismatic new tenant offers what Laura least expects: a second chance.


Darcy isn’t surprised her mom doesn’t understand her, though she never imagined her suddenly acting like a love-struck teen herself. With Troy starting to show signs of their father’s bipolar disorder, and her best friend increasingly secretive, Darcy turns to her new boyfriend, Nick, for support. Yet Nick has a troubled side of his own, forcing Darcy toward life-altering choices.


Exploring the effects of grief on both mother and daughter, Equilibrium is a thoughtful, resolutely uplifting novel about finding the balance between holding on and letting go, between knowing when to mourn and when to hope, and between the love we seek and the love we choose to give.


My Thoughts:   The Klein Family, mom Laura, 15-year old Darcy and 13-year old Troy have spent the past year grieving the death of their dad and husband, Jack.   Jack’s death has been especially difficult because Jack suffered from bipolar disorder and, as a result, took his own life.  Jack was a loving husband and a wonderful dad much of the time but, while in the clutches of a manic episode or severe depression, he could be a very different person.  Lorrie Thomson demonstrates, through the lives of the three Klein family members, how painful the grieving process can be when the person you loved and lost was mentally ill.  Darcy and Troy have an especially difficult time with the loss of their dad because they are forced to face the truth of the person their dad was and still believe that he loved them.


Jack was a dysfunctional and flawed human being.  He was also brilliant, creative, full of fun and extremely loving.  He made Darcy and Troy feel like they were the most special children in the world.  Laura was impressed with and inspired by Jack and there was nobody she loved more.  She spent the last ten years taking care of him and his mental illness while revising and rewriting his novels.  Towards the end it became difficult to be sure who’d written the final product.   Now that she has the time, Laura’s considering returning to her abandoned writing career but she’s full of doubt about her ability to write well thanks to Jack’s unkind criticism.  She’s also afraid, questioning whether she’s any good at writing at all.  Laura’s also lonely and a part of her wants to be cared for.  She spent so many years caring for Jack, almost as if he was her third child, that it feels as if she’s been a single mother for too long.


Laura spent a lot of time worried about her children and about being a strict, close mom to Darcy and Troy, but her behavior belied her intentions. She feels Darcy is spending time with a boy who’s not good for her, but Laura doesn’t do much to rectify this situation.  And she’s concerned Troy is exhibiting the early stages of bipolar disorder but it takes Darcy and some others pushing Laura for her to get Troy help.    Laura rents Jack’s studio in the house to a tenant, an attractive man, Aidan despite her fear it might upset Darcy and Troy.  Fortunately, Aidan is a good guy.  He hits it off with Troy and soon becomes the father figure Troy needs.  This works out doubly well since Laura gets into a relationship with Aidan pretty quickly.  I thought this wasn’t a great idea considering Darcy is dealing with her first serious relationship.


Darcy, it turns out, is the smart and responsible one in the family.  She begins the story seeming like the typical rebellious teenager.  This is more from her mother's point of view and we soon learn, Laura doesn't know her daughter nearly as well as she thinks she does.  She’s sweet, smart-assed and struggling with her dad’s death.  Over the past year, she’s realized that as great as she thought her dad was, he was also a very flawed man.  She understands that her dad used the love she had for him to manipulate her into keeping secrets from her mother.  Although this angers Darcy at first, it ultimately makes her sad for her dad and strengthens her love for him.  Darcy’s also able to better understand her mother and her experience with Darcy’s dad.  Darcy realizes her boyfriend, Nick, is soft and vulnerable deep down and has been terribly hurt by his own father, a mean and ugly man.   Darcy realizes that she needs to think about who she is and wants to be as well as what’s she’s learned about life if she wants to help Nick avoid ruining his life.


Thomson has a good eye for family interactions and understands the dynamics of parent/child relationships. I liked Thomson writing style, despite some heavy-handed descriptions occasionally. The theme of mental illness and its impact on an entire family is fascinating and, aside from a few glitches, keeps the story moving at a good, even pace.  Themes of love and loss, of loyalty and trust and of letting go flow throughout the pages of Equilibrium, as well and show us how the Klein Family is united in their grief and ready to move on with their lives together.  My only real objection to this story is how it ended happily tied up in a big red bow but I know there are many readers who appreciate an ending like this.  I think readers who enjoy well-written, thoughtful stories about coping with life will enjoy this book.

Thank you to TLC Book Tours and Lorrie Thomson for a copy of Equilibrium.
Posted by Unknown at 12:56 PM