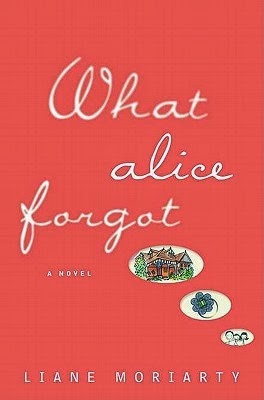 What Alice Forgot by Liane Moriarty


Book Summary:   Remember the woman you used to be ...

Alice is twenty-nine. She is whimsical, optimistic and adores sleep, chocolate, her ramshackle new house and her wonderful husband Nick. What's more, she's looking forward to the birth of the 'Sultana' - her first baby.

But now Alice has slipped and hit her head in her step-aerobics class and everyone's telling her she's misplaced the last ten years of her life.

In fact, it would seem that Alice is actually thirty-nine and now she loves schedules, expensive lingerie, caffeine and manicures. She has three children and the honeymoon is well and truly over for her and Nick. In fact, he looks at her like she's his worst enemy. What's more, her beloved sister Elisabeth isn't speaking to her either. And who is this 'Gina' everyone is so carefully trying not to mention?

Alice isn't sure that she likes life ten years on. Every photo is another memory she doesn't have and nothing makes sense. Just how much can happen in a decade? Has she really lost her lovely husband forever?
My thoughts:   I loved this book.  I expected a fun, entertaining book but it was much more.  What Alice Forgot is smart, funny, complex and thoughtful.  It’s a light, humorous and charming book on one level but there’s a much deeper and more thought-provoking aspect as the narrative progresses.  About one-quarter into it, when I reluctantly put it down for a while, I realized the story had stuck with me.  I was thinking about some of the issues it raised.  Author, Liane Moriarty, successfully incorporated serious issues affecting women and marriages into the story without interrupting the easy flow of the book or its readability.   Moriarty’s success comes as a result of her ability to create main characters that are three-dimensional and fleshed out.


Moriarty tells Alice’s story from the point of view of Alice and two other women.  Elisabeth, Alice’s sister, writes daily journal entries to her psychologist.  She’s seeing him because she struggled with infertility issues for many years while she and her husband tried to get pregnant.  Alice’s grandmother, Frannie, writes a letter each day to an old flame, regaling him with stories about what’s happening in her life.  Elisabeth and Frannie tell their own stories, with Alice’s occasional help, offering further intrigue and interest to this book.  Through Alice, Elisabeth and Frannie, we learn all about Alice’s past, as well as her situation currently, about Alice’s other family members, particularly her eccentric and interesting mother, Barbara, and her friends, especially Gina.  There’s much about Alice, her family and friends that I’m holding back because ‘meeting’ them through reading this book is a treat.


The characters alone make this book worth reading.  Moriarty created compelling characters familiar to us and with whom we can relate.  I found it easy, as I read this story, to imagine Alice and her family and friends around a table at the local coffee shop, enjoying Alice’s daughter’s performance at the talent show or chatting casually at a summer BBQ.  The fact that Alice, her husband, Nick, and her family and friends aren’t perfect but have flaws and eccentricities makes them all the more appealing and interesting.  Moriarty uses Alice’s memory loss as a vehicle for looking at the way Alice, Elisabeth and the others have changed over the years, for better or worse.  We get a much more thorough perspective of the characters and who they are as a result of Alice’s amnesia.  This is because Alice’s memory loss has caused her to regress. In other words, at the time of the memory loss, she wakes up thinking it’s ten years earlier, but Alice’s family, friends, even Alice, as well as the world around her, have not stopped changing and growing.   This brings many serious issues that affected Elisabeth, Alice and some of the other characters, over the years, to the forefront for exploration.   Alice asks different people in her life probing questions she wouldn’t normally ask if she hadn’t suffered memory loss.  This provides for many interesting and varied viewpoints (everybody has an opinion!) on the different issues that would be more difficult to smoothly incorporate into the story, otherwise.


Many of themes in What Alice Forgot are culled from current life by Moriarty.  If women aren’t already discussing the topics in this book, I expect they will after reading What Alice Forgot.  Moriaty’s themes, particularly those of of identity, change and growth, individually, and within relationships and marriage, speak to most women. They were on my mind, as I read Alice’s story, well before I finished this book.  And, I continued to think about them once I finished the story.   I think many women will think about these issues just as Alice does. Alice is fortunate, in some ways that she’s able to revisit her younger self and, eventually, see how she’s changed and grown over time.  We don’t get quite the same opportunity Alice does but we can look back on our lives and think about how we’ve changed and grown in individually and within our relationships and marriage.


I “unburied” What Alice Forgot on my bookshelf when Liane Moriarty’s current book, The Husband’s Secret was published and began receiving wonderful reviews from bloggers.  I didn’t know when I would get a copy of The Husband’s Secret to read and, if I don’t read an extremely popular book when it’s first published, I usually like to wait until the fervor has died down before I read the book.  I remembered What Alice Forgot also received fantastic reviews. And now I know why!


I highly recommend this book
Posted by Unknown at 1:03 PM