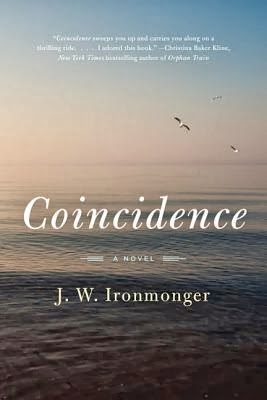 Book Summary:   One seagull and four pieces of bread decide the course of one person's life. But is the rest just coincidence? THE COINCIDENCE AUTHORITY combines the ideas of David Mitchell or Hanif Kureishi with the warmth of David Nicholls or Marina Lewycka.


Thomas Post is an expert on coincidence. He's an authority. Every coincidence, he says, can be explained by the cold laws of chance. But why then do coincidences so afflict the life of Azalea Lewis? And why has Thomas Post's orderly life been thrown into such disarray by the coincidences of Azalea?


This is the tale of two lost souls, each with a quest to understand the secret patterns hidden in a very random universe. It is the story of the short but eventful life of Azalea Lewis, a foundling child discovered at a travelling fair; and it is the unfolding story of Thomas Post who looks for patterns in a haphazard world, and who finds his belief in the fabric of life challenged by Azalea. From the windswept tranquility of a Manx village, to the commuter swarms of London, to the brutal abduction of child soldiers in Africa, this is a search for truth, a search for God, a search for love, and a search for a decent pizza in North London.


My Thoughts:   I thought this was a fantastic book.  On one level it’s a love story between Thomas Post and Azalea Lewis, but too complex to be simply be labeled as such.  Thomas Post is a Lecturer in Applied Philosophy at the Institute for Philosophy in London. He’s nicknamed ‘the Coincidence Man’ because he spends much of his time studying coincidences.  Azalea teaches English literature and poetry to adult learners at this same University.  She usually teaches at night and in a completely different area than Thomas. Their paths don’t cross for many years until one day when Azalea visits Thomas’ office to discuss the many events in her past and in her history that she believes to be coincidences.


Azalea is a likable character who it’s easy to sympathize with after hearing the story of the several tragedies of her childhood.   By the age of thirteen she’d been adopted twice.  She believed for many years her biological mother abandoned her.  She also doesn’t know the name of her biological father.  Azalea eventually learns what happened to her real mother and who might be her biological father.  The information she discovers and the events of her past are fascinating.  When she explains how and why she sees many of the events as coincidences it’s difficult to disagree with her.


Thomas, it seems, doesn’t really believe in coincidences and mostly argues against them.  Azalea, on the other hand, believes everything happens for a reason and places a lot of significance on the coincidences in her life.   When Azalea tells the story of her difficult, painful childhood to Thomas, and the coincidences she sees, he argues against the idea of coincidences.  There are several pages of interesting discussion involving philosophy, the Big Bang Theory, determinism and pre-determinism versus free will, and many different philosophers.  Thomas doesn’t change Azalea’s mind. She still believes things happen for a reason.


There’s a strong connection between Azalea and Thomas but, he more than she, allow their differences about the existence of coincidences to come between them.   He can be quite arrogant and condescending.  Even after everything Azalea tells him about her childhood, he doesn’t really understand why she shies away from relationships.  She takes her time deciding she wants to date Thomas and, even while dating she’s not sure she wants a relationship with him.  She feels he’ll never understand what Uganda and the mission where she spent most of her childhood with her adoptive parents means to her.  And she knows Thomas doesn’t understand why she believes events in her past are definitely coincidences and they are of great significance to her.  So, although she loves him she’s not sure she can spend her life with him.


This book is also compelling for its beautiful and descriptive writing.  The passages regarding Uganda and the mission where Azalea lived with her adoptive parents is vividly described as a lush, beautiful countryside teeming with happy people but a lot of poverty and violence.  Although much of the conversation throughout the book is serious there’s humor and lighter dialogue, especially between Thomas and Azalea.  This helps make the novel glimmer with realism and gets you invested in both main characters, though some of Thomas’ stubborn tendencies made me feel frustrated for Azalea.


Without giving anything away, the book is not a fairy tale and not for the intellectually faint of heart. It is heavy and layered in many ways: there’s philosophy, physics as well as romance.  So if you fancy yourself an intellectual romantic or a romantic with an intellectual bent, this book is calling for you to read it.
Posted by Unknown at 12:04 PM