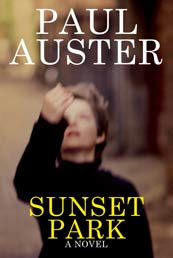 Publisher: Sunset Park follows the hopes and fears of a cast of unforgettable characters brought together by the mysterious Miles Heller during the dark months of the 2008 economic collapse.
An enigmatic young man employed as a trash-out worker in southern Florida obsessively photographing thousands of abandoned objects left behind by the evicted families.
A group of young people squatting in an apartment in Sunset Park, Brooklyn.
The Hospital for Broken Things, which specializes in repairing the artifacts of a vanished world. William Wyler's 1946 classic The Best Years of Our Lives.
A celebrated actress preparing to return to Broadway.
An independent publisher desperately trying to save his business and his marriage.
These are just some of the elements Auster magically weaves together in this immensely moving novel about contemporary America and its ghosts. Sunset Park is a surprising departure that confirms Paul Auster as one of our greatest living writers.

My Thoughts: The recession and its impact on the lives of young and old floods the pages of Sunset Park. Paul Auster's young characters struggle to do something worthwhile with their lives and find someone to love while the older characters work at holding onto the careers and lives they've created. Amidst this difficult time there is emphasis on the traditions, symbols and relics of the past.
The novel, like the main character, Miles Heller, lacks direction or purpose. Interesting themes and ideas are introduced but never develop into anything substantive. There is a loosely formed plot that allows tensions to build, but, unfortunately, resolutions are anticlimactic. Relics of the past and individuals' belongings are abandoned much the same as many of Miles' future plans and goals. He spends his days furthering his girlfriend's education rather than his own and reading about former baseball players, an interest he and his father, Morris, once shared.
Miles Heller is the most prominent character and, unfortunately, much of the focus is on him. This detracts from the more interesting characters, such as Alice and Ellen. Auster does an admirable job of developing them. Alice, an English grad student writing her dissertation and Ellen, a budding artist and disheartened real estate agent, are recognizable and relatable as young ambitious women with goals, hopes and dreams. Contrast them with Miles, who is restless and without direction, and it's clear who we'd rather spend time reading about.
Then there is the young Pilar, Miles' 17-year old girlfriend. She is working hard to be accepted into and prepared for college. She's eager to learn and full of hope. Yet, we don't hear her voice or know her story much beyond the surface. She is stifled within the confines of Miles' restlessness and only permitted to grow as much as he allows.
Paul Auster doesn't seem to care too much for this novel's older female characters. Willa, step-mother to Miles and wife to Morris, although intelligent, is described as an hysterical, angry and adamant woman who selfishly wants Morris to choose between her or Miles. She won't abide both being in his life. Miles' biological mother, Mary Lee, is a self-centered actress who puts acting before anything else. The only reason she seems to allow others into her life is every meeting and get-together is a role for her to try out.
Morris Heller is the most interesting character in Sunset Park. He struggles to reconcile his love for Miles with his resentment at the tension Miles' behavior has created in the family. He worries ceaselessly that his small publishing company will fail and he will disappoint his employees. But his greatest fear is that his own behavior, which has desperately upset Willa, will be the straw that breaks their marriage in two. As Morris' story progresses, the fear that we are witnessing the unraveling of this kind, caring upstanding man becomes very real.
Bing Nathan, the other resident of the Sunset Park house with Alice, Ellen and Miles, is the unifying force among the characters. He is also another of the more interesting people who, along with Alice and Ellen, doesn't get enough attention. He values the objects and traditions of the past as evident in the shop he owns, The Hospital for Broken Things, where he mends typewriters, phonographs and the like. He encourages sit-down dinners with the house members and shuns emails for hand-written letters. This charming link to the past makes the reader hungry for more about Bing's past which, sadly, is never provided.
I almost stopped reading part way through because there wasn't anything very interesting happening. But just as I was about to give up, I turned the page to find the section on Bing Nathan followed by several of the other characters' stories. The only reason I would recommend this book at all would be for some of the character sketches. But I don't think that's enough of a reason to read it. Miles decides that there's nothing to hope for and, in terms of this novel, I can't disagree with him.
I received an ARC of Sunset Park from Henry Holt via the Shelf Awareness Newsletter.
Posted by Unknown at 12:46 PM