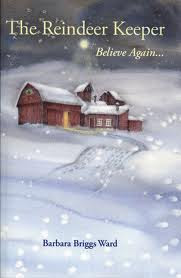 Book Summary: Abbey senses something special about the little man tending to the reindeer who, along with a century-old farmhouse, a barn full of animals, and fields abounding in woods and pasture, was a gift to Abbey from a stranger. Abbey and her husband, Steve, move in just before the holidays. They have been together since the '60s, eloping when Steve returned from Vietnam. Now with Abbey's cancer in remission, they're looking forward to their boys coming home for Christmas.

Turns out this Christmas proves to be more magical than anticipated as Abbey realizes an understanding never thought possible through the rekindling of a belief rooted in childhood. Of course it's who delivers this gift on Christmas Eve that gives Abbey and Steve the strength to face their greatest challenge.


My Thoughts: Do you remember when you were a child and believed in Santa Claus? How that made you feel? I remember how excited I felt as Christmas approached. I'd write a note to Santa along with and on Christmas Eve we'd leave cookies and milk for him, some carrots and celery for his reindeer! I'd go to bed feeling all tingly, filled with excitement, absolutely sure I couldn't sleep and convinced Santa would know I was awake when he arrived. I secretly hoped for a glimpse of Santa in his beautiful red suit but also felt a tiny bit afraid of seeing him, of being caught awake...and then it was morning and the stockings were stuffed and presents circled the tree. I remember those days leading up to Christmas even the air seemed different, more crisper filled with a bit of magic while all around me everything seemed special. My grandfather once told me I was feeling the wonder and awe of believing in Santa and the magic and beauty of Christmas...

Barbara Briggs Ward has succeeded in bringing these feelings back in her beautifully written, poignant book. The Reindeer Keeper isn't only a story about Christmas, although the chapters about Abbey and Steve celebrating Christmas with their family are heart-warming, cozy and filled with love. It's also a story about believing in the magic all year long, through the good and bad, the struggles and the celebrations, keeping close the people you love.

Abbey is a gentle, strong and kind woman who loves to laugh and enjoys life. She understands people and respects their boundaries, adores coffee and is a wonderful cook. Abbey is the kind of woman most of us would love to have as a friend. She appears to live a charmed life but, as with so many people, her life isn't quite what it appears. Her past is tinged with pain and suffering due to a family tragedy. Currently, Abbey is filled with remorse while she comes to terms with the truth of her past she's been blind to until now. She's also worried that her cancer, which has been in remission for many months, is back. Abbey's greatest fear is leaving her husband Steve and her grown sons, Eric and Sam who are just settling down to their adult lives. But Abbey has never completely lost the faith and belief she had as an innocent child and it will be her greatest strength in the weeks and months to come. Abbey learns that although we may not be able to control what happens to us and those we love in this life, we can control how we react and deal with it. And that makes all the difference.

Ms. Ward gas written a captivating and poignant story about coping with the chaotic mess of life and remembering what really matters. She reminds her readers to reach deep inside and find that little bit of belief left over from childhood and set it on fire. Imagine what our world would be like if even half of us still believed in the magic and wonder in life that so excited us as children! The Reindeer Keeper: Believe Again... is a wonderful book to read at Christmas but worth reading during any season at any time of the year. This story is one we can all benefit from and enjoy.

I received a copy of The Reindeer Keeper: Believe Again... from the author.
Posted by Unknown at 3:01 PM