First Chapter First Paragraph Tuesday Intros is a weekly meme hosted by Diane at Bibliophile by the Sea every Tuesday. To participate share the opening paragraph or two of a book (I have a third one, today, sorry!) you've decided to read based on that paragraph. I enjoy books that are set in Ireland  or include Irish characters since, with half my family Irish, Ireland has always been an influence in my life. This book, first published in 1929, is set primarily in Cork, during the Irish War of Independence, or the Anglo-Irish War, a time of unrest and violence in Ireland when, in a fight for independence, the Irish Republican Army attacked the British government forces in Ireland.. A movie based on this book came out in 1999. I wanted to read the book before I saw the movie, although it seems it's taken me a while to get around to reading the book!

Don't forget to drop by Bibliophile By the Sea and read Diane's selection this week and be sure to visit and read the contributions of other participants in this fun meme. 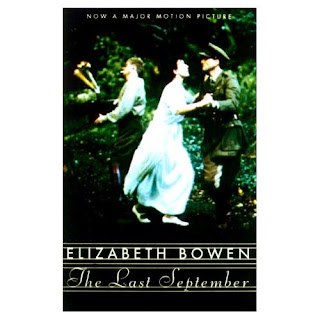 The Last September by Elizabeth Bowen

About six o'clock the sound of a motor, collected out of the wide country and narrowed under the trees of the avenue, brought the household out in excitement on to the steps. Up among the beeches, a thin iron gate twanged; the car slid out of a net of shadows down the slope to the house. Behind the flashing windscreen Mr. and Mrs. Montmorency produced--arms waving and a wild escape to the wind of her mauve motor veil--an agitation of greeting. They were long-promised visitors. They exclaimed, Sir Richard and Lady Naylor exclaimed and signalled: no one spoke yet. It was a moment of happiness, of perfection.

In those days, girls wore crisp white skirts and transparent blouses clotted with white flowers; ribbons threaded through with a view to appearance, ap-peared over the shoulders. So that Lois stood at the top of the steps looking cool and fresh; she knew how fresh she must look, like other young girls, and clasping her elbows tightly behind her back tried hard to conceal her embarrassment. The dogs came pattering out from the hail and stood beside her; above, the large façade of the house stared coldly over its mounting lawns. She wished she could freeze the moment and keep it always. But as the car approached, as it stopped, she stooped down and patted one of the dogs.

As the car drew up the Montmorencys unwound from their rugs. They stood shaking hands and laughing in the yellow theatrical sunshine. They had motored over from Carlow. Two toppling waves of excitement had crashed and mingled; for moments, everybody was inaudible. Mrs. Montmorency looked up the steps. "And this is the niece!" she exclaimed with delight. "Aren't we dusty!" she added, as Lois said nothing. "Aren't we too terribly dusty!" And a tired look came down at the back of her eyes at the thought of how dusty she was.