Some Kind of Peace by Camilla Grebe and Åsa Träff 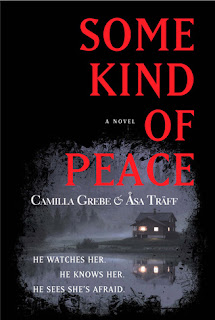 Some Kind of Peace by Camilla Grebe and Åsa Träff


Book Summary: It seems so idyllic. But something is out of place. In the neatly raked gravel parking area is a dazzlingly clean black Jeep. The paint of the Jeep reflects clematis with large pure white blossoms climbing up a knotted old apple tree. Someone is lying under the low trunk and crooked branches of the tree. A young woman, a girl. . . . Siri Bergman is a thirty-four-year-old psychologist who works in central Stockholm and lives alone in an isolated cottage out of the city. She has a troublesome secret in her past and has been trying to move on with her life. Terrified of the dark, she leaves all the lights on when she goes to bed—having a few glasses of wine each night to calm her nerves—but she can’t shake the feeling that someone is watching her through the blackened windows at night...  (for more of the summary, see Goodreads)


My Thoughts:   I like to read in bed at night when it’s quiet.  I thought this book was perfect for late night reading.  It’s fantastic with bone-chilling, hair-raising moments. Seriously!   There were times reading this book I jumped at a sound or felt a shiver down my spine, causing me to pull the covers up around my neck.  Very late one night, one of my cats, Mr. Magoo, started loudly slurping his water.  I bolted straight up, almost screaming!  I was so engrossed in the book, I didn’t even notice Bob (a large cat who’s difficult to ignore) run off the bed after my actions scared him away!


Siri is Swedish.  She’s a psychologist and was recently widowed.  Most significantly, Siri is also the main character as well as the book’s narrator.  In this way, we get to know her quite well.  The authors, who are sisters, incidentally, have created a three-dimensional character with the personality traits and flaws of a human being such that it’s hard to believe Siri’s fictional.  She quickly reveals herself to be a dichotomy between a professional, clear-headed therapist and a frightened, damaged and dysfunctional woman.  A recent traumatic event, resulting in the death of her husband, Sven, has caused Siri to develop some bad habits.  She’s also withdrawn from her friends and family.  I found Siri even more interesting because one of the authors, Åsa Träff, is not only a practicing psychologist in Sweden; she’s also married to a psychologist.  Does this mean Siri is realistic? Can a “real” psychologist be like Siri and still be good at her job?  Siri’s best friend, and colleague, Aina, says yes.  “Being a depressed, passive failure with phobias can make you a better therapist.”


Siri is focused and attentive when she’s with her patients.  They’re interesting individuals with fascinating anxieties and, occasionally, disturbing issues.  They seem to trust Siri and are relaxed in her presence.  Early in the book, it’s difficult to reconcile the daytime therapist Siri with the woman who sits alone in her cottage at night, petrified of the dark and plagued by nightmares about Sven’s death.  But Siri is honest and open about herself with us so we soon feel we understand her.  Siri’s world becomes even more unbalanced and dark when one of her patients, Sara, is found dead.   As awful as this is, it’s not that surprising considering this young woman’s problems.   But, when Siri  is told by the police Sara was murdered, and the killer blames Siri for what he did, a chill ran down my spine.  From this point on in the narrative, a creepy, sinister air pervades the story, growing with each successive chapter.


The police and Siri’s friends and colleagues believe someone is stalking her. Siri, reluctant to be a victim, refuses to take the threats seriously.   She just can’t believe that someone she’s encountered in her life wants to hurt her.   Siri sees herself as a normal person simply living her life like everyone else.  She manages to brush off, albeit with increasing anxiety, the odd occurrences that happen in her life until an extremely depraved event occurs.  Siri’s so frightened she temporarily relocates and begins assisting police to figure out who’s after her.  The problem, Siri discovers, is though no one person stands out, almost everybody in her life comes under suspicion.  Between the investigation and her other problems and anxieties, Siri’s sure she’s losing her mind.


To say what happens in the end would be to spoil the very unexpected and effective surprise.  And I’ve also decided not to reveal one or two other unexpected but fascinating parts of the book.  I’ll just leave you this hint: the stalker isn’t totally silent!  I was sure more than once I knew who was after Siri but I was wrong each time.  This book pays off in a myriad of ways and even if it hadn’t, the journey to get there was well worth it.   If you enjoy psychological thrillers and crime dramas, you don’t want to miss Some Kind of Peace.  I’m looking forward to Camilla Grebe and Åsa Träff next book, out in spring 2013.


Thank you to the Free Press for a beautiful copy of Some Kind of Peace.
Posted by Unknown at 12:04 PM