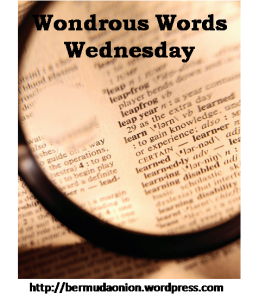 Wondrous Words Wednesday is a weekly meme hosted by Bermudaonion's Weblog where we share words we’ve encountered in our reading. Join in the fun and be sure to leave a link to your post over at Bermudaonion.

Some more words I came across while reading The Passing Bells by Phillip Rock:

"Uhlans," he said with remarkable sangfroid, considering the chilling quality of that name. "Back up."

Uhlans:   (in Polish : "Ułan"; "Ulan" in German ) were Polish light cavalry armed with lances, sabers and pistols. The title was later used by lancer  regiments in the Russian, Prussian and Austrian armies.
(from Wikipedia)

"He was not, of course, wet at all, having stepped from a limousine to the front door under a large umbrella.  His dark wool overcoat with astrakhan collar was unblemished by rain."

Astrakhan: a cloth with a usually wool, curled, and looped pile resembling karakul
Karakul:
1. any of a breed of hardy fat-tailed sheep of central Asian origin with a narrow body and coarse wiry fur
2. the usually curly glossy black coat of a very young karakul lamb valued as fur

These words come from the second book in Phillip Rock's trilogy,  Circles of Time:

"Can you imagine a phaeton and team driving into Godalming station these days?"
Phaeton:
1. any of various light, four-wheeled carriages, with or without a top, having one or two seats facing forward, used in the 19th century.

2. a vintage automobile of the touring-car type
"By 1917 he was brevetted a brigadier general, a young thruster obviously destined for greater honors, but then he had fallen from grace."
Brevetted:

1. a commission promoting a military officer to a higher rank without increase of pay and with limited exercise of the higher rank, often granted as an honor immediately before retirement
2. to appoint, promote or honor by brevet
"She had always dreamed of it.  Alexandra being married -  perhaps to an officer in the dragoons so that she would walk with her young husband beneath an arch of sabers between rows of men with plumed helmets and burnished cuirasses."
Dragoon:
1. a European cavalryman of a heavily armed troop
2. a member of a military unit formerly composed of such cavalrymen, as in the British army
Cuirass: Also called corselet, defensive armor for the torso comprising a breastplate and backplate, originally made of leather.
Posted by Unknown at 11:53 AM