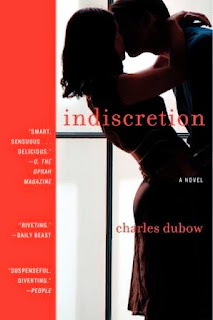 
Book Summary:   Harry and Madeleine Winslow have been blessed with talent, money and charm.  Harry is a National Book Award-winning author.  Madeleine is a woman of sublime beauty and grace.  The Winslows play host to a coterie of close friends and acolytes eager to bask in their golden radiance, whether they are in their bucolic East Hampton cottage, abroad in Rome, or in their comfortable Manhattan brownstone.


One weekend Harry and Maddy meet Claire, who eagerly falls into their welcoming orbit.  But soon her reverence transforms into a dangerous desire and she no longer remains one of their hangers-on.


A story of love, lust, deception and betrayal as seen through the omniscient eyes of Maddy’s childhood friend, Walter, a narrator akin to Nick Carraway in The Great Gatsby, Indiscretion is an irresistibly sensual page-turner.


My Thoughts:  Personality and behavior has always interested me.   Infidelity, for example: cheating on a significant other, especially a spouse, is one of those behaviors I just don’t “get”.   It makes life messy, unhappy and complicated for the people directly involved and for many who are involved tangentially.  So I was interested in Indiscretion by Charles Dubow because I wondered if the cheater would be taken to task for what he did or if the author, himself a male, would gloss over the behavior.  I also hoped that Charles Dubow would portray the results of a spouse’s cheating.  Often it destroys the lives of the people they supposedly loved.  I still don’t understand cheating and, although Indiscretion is an interesting book and written well-enough to make me angry at times as well as sad, it didn’t provide any more insight or answers for cheating than I had going in.  I expect this is because there aren’t any.  But Dubow does show what can happen to a solid, loving family when one spouse cheats.


Harry Winslow, a fiction writer, lives what many would consider a charmed life.  He  and his wife Maddy have a strong marriage and love each other like they did the day they were married twenty years ago.  They have a young son, Johnny, whom they fought hard to have.  He is their pride.   Thanks to Maddy, who has supported Harry in all ways, including financially, he’s been able to work at writing for years.  Currently, his first bestselling book was awarded the National Book Award.  When Indiscretion begins, Harry and Maddy are throwing one of their usual summer parties in the Hamptons to celebrate.  Harry is charming, funny, a great host and storyteller.  He appears to only have eyes for his beautiful wife, Maddy who is kind and witty.


One of the guests at their party, Claire, isn’t that interested in her date, Clive, but wants a weekend in the Hamptons and the chance to meet the author, Harry Winslow.  Claire is in her early 20s and, of course, is “beautiful and alluring”.  She’s just starting out her publishing career so she has very little money.   Claire instantly falls in love with Harry and Maddy’s home and is  smitten with Harry.  She flirts with him then ingratiates herself with Maddy by offering to help in the kitchen.  Claire has found something she likes and wants:  Harry and Maddy’s life.  After some careful and subtle manipulation, she’s suddenly spending every weekend with the Winslows in the Hamptons.


We soon see a different side of the charming, pleasant Claire, however, when she learns the Winslows are moving to Rome for a year once the summer’s over. Her poise and charm are replaced by a sullenness and anxiety.  She drinks far too much one night and when Harry drives her home, Claire throws herself at him, declaring her love and asking him not to go to Rome.  She beseeches him to run away with her which a flabbergasted Harry declines.  Claire slips away the next morning leaving a contrite note of apology and the Winslows move to Rome.


From the title of the book, I was sure Dubow wasn’t finished with the saga of Claire and Harry, especially since the book was barely half over.  At this point in the story, I distrusted almost everything Claire said and did, believing it was all designed to serve her ulterior motive: Harry.  But then I stopped myself, wondering if I really thought she alone was to blame for whatever was growing between them.  Very few older men don’t respond to the flirtations of a young, beautiful woman. Given Harry’s personality, I suspect he went right along with Claire’s flirting and went out of his way to charm her with stories from his past and life anecdotes.


After being in Rome a few months, Harry returns to NYC alone to meet with his publishers.  Unfortunately, the formulary aspect of this book means I expect every reader knows where the story is going.  Harry’s agent takes him to a publishing party where his presence is expected.  I’m sure you can all guess what comes next.  Shocker of shockers: Claire happens to be at the party.   Coincidence?  She’d have Harry think so. Claire seems genuinely surprised to see him.  Harry’s only too happy to see her, confirming suspicions that Harry’s interested.  So when their affair begins, I don’t think either one deserves the lion’s share of the blame.   They both know what’s at stake.  Harry has a responsibility to Maddy and Johnny, of course but Claire knows all about his family and how Harry loves them.   Claire behaves like a “typical mistress”, whining, cajoling, crying, and becoming angry when she’s denied time with him.  She wants to go to fancy, expensive restaurants and on vacations together etc.   As the story progresses, it doesn’t appear as if it’s going to end well.  You’ll have to read it to find out!


Dubow includes an interesting vehicle in the story that made me question what was really happening with Harry and Claire.  Walter  is a high-powered attorney who never married.  He’s been friends with Maddy Winslow since she was a child.  They went to Yale together and he becomes a great friend to Harry as well.   He lives near the Winslows in Manhattan most of the year.  Summer weekends he spends at his family’s summer house next door to Harry and Maddy.  Suffice to say, Walter knows them well.  Walter becomes the narrator of this story from page 25 to the end.  I think he means well and wants to tell a true story.  He admits “I have tried to be as scrupulous as possible in my telling of it.”  The problem I have with Walter is that he’s in love with Maddy and has been for many years.


At one point Walter tries to seduce Claire but she turns him down, seeing Walter more like an older brother.  As a result of his feelings for both women, Walter isn’t a reliable narrator.  He also admits that much of the story he tells is second-hand, culled from scribbles on legal pads, recalled memories and other sources that are inherently unreliable.  So it’s almost impossible to know if the story we get is unbiased.  Is it tainted by personal feelings and emotions, and if so, who’s? Harry’s or Walter’s or both depending where in the story we are. This is because much of what Walter tells us comes from a manuscript of Harry’s.  I can’t divulge more without giving away the ending.


Ultimately, it’s the story of a cheating spouse with a woman who knew his family well but wanted their life to be her own.  And, as with so many tales of indiscretion, it doesn’t end well.  Indiscretion is well written.  I had strong feelings for the characters, and not always positive ones, which is a good thing as it means they were well developed and complex.  However, despite a few surprises, the book was really nothing more than a typical May-December story of cheating populated of beautiful people.  Of course there is the fallout to deal with, but this part of the book didn’t offer much in the way of new insights so if you’re looking for compelling psychological studies, this isn’t the book for you.


Thank you to TLC Book Tours and William Morrow for a paperback copy of Indiscretion.
Posted by Unknown at 11:45 AM