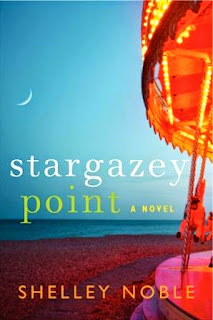 
Book Summary: Once a popular South Carolina family beach resort, Stargazey Point’s beaches have eroded, businesses have closed and skyrocketing taxes are driving the locals away.  Stargazey Point, like Abbie Sinclair, is fighting to survive.
Devastated by tragedy, Abbie thinks she has nothing left to give, but slowly she’s drawn into the lives of the people around her, the Crispin siblings, each with their own secret fears.

My Thoughts:  Stargazey Point, set in South Carolina in a once thriving beachside community is a light and sweet, if not somewhat predictable story, ideal for hot summer days.  I was hoping for a story with a lot of southern flavor but was somewhat disappointed. However, there are some wonderful, charming and quirky characters in Stargazey Point that make this book a worthwhile read.


Beau, Marnie and Millie Crispin are elderly siblings.  They live together in a huge wood and stucco house with wrap-around porches on several acres of ocean-front property in Stargazey Point.  The Crispin’s home has become a ‘white elephant’ (albatross) for them in their old age.  Upkeep costs, as well as taxes, have forced the Crispins to think about selling, a common enough situation for many elderly.  Beau, Millie and Marnie hoped to leave the property to their niece, Celeste, who is also Abbie’s friend and the woman who sent her to Stargazey Point to convalesce.


Millie’s a sweet, thoughtful typical southern lady.  She loves dressing up for dinner, prefers dining on the best china with beautiful glasses and using the silver, treats everybody as a guest, bestowing them with her gracious manners and adores hosting fancy parties.  Millie finds the issue of selling too painful and refuses to think or talk about it.   She won’t let go of the past and voices the hope of recreating and reliving some of her favorite times.  Millie wants to throw an enormous birthday party for Beau’s 80th, for example.  She talks about opening the ballroom which hasn’t been used in years, redecorating it, hiring a string quartet and the best caterers.  Money doesn’t concern Millie: she’s only desperate to bring back the happiest times spent in Crispin House.


Beau drives his sister’s nuts but they love him.  He’s happiest whittling away at a piece of wood and always has the supplies he requires to do so bulging out of his pockets.  He knows nothing of Millie’s big plans for his 80th and wouldn’t care for them.  He’s a calm, quiet man who enjoys his solitude.  He ‘keeps his counsel’ and others feel comfortable and secure in his presence.


Marnie is the most worldly of the three which shows in her attitude and mannerisms.  She’s observant and understands people.  Having traveled extensively, she knew what Abbie needed when she first arrived at Crispin House.  Marnie’s innate understanding of people often bonds her to others, as it bonded she and Abbie.  Sometimes, though, Marnie’s outspoken way puts people off!


The Crispin siblings welcome Abbie into their home.  They quickly realize she’s sad, lonely, angry and restless.  They’re unaware of the devastating tragedy Abbie is grieving over.  But she’s unaware of the difficulties and sadness troubling Beau, Millie and Marnie.  Abbie soon realizes something’s amiss in Crispin house as well as in Stargazey Point.  It’s easy to see that the beautiful spot isn’t the glorious place it once was.   It’s possible that Abbie with her background nurturing the less fortunate and creating beauty where there was once despair can help the residents of Stargazey Point resurrect the beautiful beach community it once was.  But first the people of Stargazey Point might have to help Abbie get back on her feet, forgive herself and smile again.  Can this dysfunctional group of scared, flawed characters help and support each other and rebuild a crumbling town?  In this story of love, support and friendship it seems possible.  Life doesn’t always work out for the best but Abbie may discover it’s worth starting over and trying again.


Stargazey Point is a sweet, quirky little novel that’s a quick and light, a little too light for my tastes, generally, but great for the beach or those late sleepless nights.  I also would have loved to have this book in the hospital where it was distracting and difficult to concentrate except when reading about a beautiful place, on the ocean, where people are trying to overcome a myriad of troubles!

Thank you to TLC Book Tours and William Morrow Publishers for an ARC of Stargazey Point.
Posted by Unknown at 11:39 AM