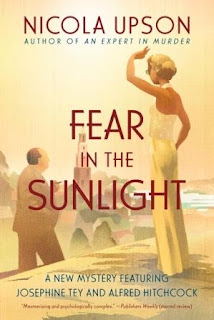 Fear in the Sunlight by Nicola Upson


Book Summary:    Summer 1936. Mystery writer Josephine Tey joins her friends in the resort village of Portmeirion, Wales, to celebrate her fortieth birthday. Alfred Hitchcock and his wife, Alma Reville, are there to sign a deal to film Josephine’s novel, A Shilling for Candles. But things get out of hand when one of Hollywood’s leading actresses is brutally slashed to death in a cemetery near the village. The following day, as fear and suspicion take over in a setting where nothing—and no one—is quite what it seems, Chief Inspector Archie Penrose becomes increasingly unsatisfied with the way the investigation is ultimately resolved. Several years later, another horrific murder, again linked to a Hitchcock movie, drives Penrose back to the scene of the original crime to uncover the shocking truth.


My Thoughts:   The title, Fear in the Sunlight, is a reference to a quote by Alfred Hitchcock, a central character in this book.  Hitchcock, writer, director and creator, was always curious about people’s behavior and reactions.  In this novel, Nicola Upson focused on a comment by Hitchcock referring to the fear people experienced in specific conditions.  Hitchcock believed “Fear of the dark is natural, we all have it, but fear in the sunlight…where it is so unexpected – that is interesting.”  Hitchcock sets up the conditions to test his notion while dismissive and uncaring about the troubling effects his “experiment” could have on his ‘subjects’.  Upson appears to have thoroughly researched Alfred Hitchcock and his relationship with his wife for this book to our advantage and enjoyment.  Hitchcock is quite an eccentric and complex character according to Upson’s description.  He has a vulgar sense of humor and a penchant for practical jokes and experimentation involving his crew and the actors and actresses in his movies.


His wife, Alma, understands him very well and his assistant director, David Franks seems to, as well, but few others do.  Alma serves partly to explain Hitchcock to people he upsets as well as to smooth the feathers he ruffles. Hitchcock has the capacity to annoy and upset many people, as he does in this story.  Josephine Tey, an author of mysteries, is one of the characters Hitchcock has a big impact on in this book.  She’s turning 40 and, although loathe to be the center of attention, decides to spend the weekend with a group of close friends in the idyllic spot of Portmeirion, Wales where Hitchcock is nterested in basing his next movie on her most recent book.  He’s come with Alma to Portmeirion for the weekend to woo Josephine.


Josephine is suspicious of Hitchcock and unsure if she wants to grant him permission to her book. She’s well aware that the movie he makes based on her book won’t resemble the mystery she wrote.   This intrigues her because it will keep the spotlight off but she has greater fear that his cinematic product will be far better than her written one.  For a woman who exudes confidence, Josephine is very unsure of herself in most situations and prefers to stand back and observe life rather than join in. But when Alma approaches Josephine to broach the topic of her book and begin negotiations, Josephine is intrigued by the conversation and begins feeling more positive about the prospect of seeing her book on film.


I expected Josephine to be the main character in the story. Although she is one of a few central characters, this book is more about Hitchcock and his personality and character, his films and his impact on the people with which he surrounds himself.  Hitchcock invited a large contingent of actors and actresses and crew members to Portmeirion for the weekend as they’re all working on his next movie. He wants to see how they react to “fear in the sunlight”.  When his prank goes awry and ends abruptly because of two murders and a possible suicide, the idyllic Portmeirion feels like a sinister, foreboding place in the sunlight.  But this wasn’t the way Hitchcock wanted to see how people reacted to “fear in the sunlight”.  Even the murders are over-shadowed somewhat by Hitchcock and his plan to experiment when it’s leaked by his assistant director.  The number of people at Portmeirion for the weekend and the confusion as to where everyone was at the time of the murders makes it nearly impossible for the police to solve the crimes.


We eventually learn these are only a few of many murders that have been committed over the years.   In the book’s first and last section, Chief Inspector Archie Penrose, incidentally, a long-time friend of Josephine Tey, unravels the complex and confusing  string of murders that have been going on for years reveals who committed the murders and theorizes why.  The connection to Alfred Hitchcock and the guests at Portmeirion that one weekend is tangentental although there is a bit of a connection to Hitchcock’s films.    As I was reading the book, it all seemed to make sense and work but as I write this review, I’ve realized there was a lot going on in this book and it doesn’t always coalesce.   Upson is a terrific writer, creates interesting characters and uses subtle humor and fascinating observations that made this a terrific book.


Fear in the Sunlight is the fourth book in Nicola Upson’s Josephine Tey mysteries.  I’ve always meant to read the first in the series, An Expert in Murder, and the others but before I had the opportunity to do so, Fear in the Sunlight was offered to me to review from my favorite TLC Book Tours.  I couldn’t say no and I’m glad I didn’t.  I thoroughly enjoyed this book.  This despite the fact it’s not quite clear what the author wanted to say, unless it’s meant to be a mini-bio/tribute/study of Hitchcock.  I wish the book hadn’t been so “busy” as it was sometimes a bit overwhelming if not hard to follow.  This is perhaps why I wish I’d read this series from the beginning even though Upson does a terrific job making the reader feel as if they haven’t missed out on anything important if they haven’t read the other books in the series.


Thank you to TLC Book Tours and Bourbon Street Books for the opportunity to read and review Fear in the Sunlight by Nicola Upson.
Posted by Unknown at 10:58 AM