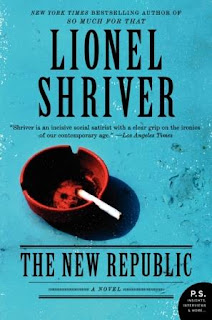 The New Republic by Lionel Shriver


Book Summary:    Edgar Kellogg has always yearned to be popular. When he leaves his lucrative law career for a foreign correspondent post in a Portuguese backwater with a homegrown terrorist movement, Edgar recognizes Barrington Saddler, the disappeared reporter he’s replacing, as the larger-than-life character he longs to emulate. Yet all is not as it appears. Os Soldados Ousados de Barba—”The Daring Soldiers of Barba” —have been blowing up the rest of the world for years in order to win independence for a province so dismal and backward that you couldn’t give the rathole away. So why, with Barrington vanished, do incidents claimed by the “SOB” suddenly dry up? A droll, playful novel, The New Republic addresses terrorism with a deft, tongue-in-cheek touch while also pressing a more intimate question: What makes particular people so magnetic, while the rest of us inspire a shrug?


My Thoughts:  Lionel Shriver has been on my list of authors who I’ve wanted to read for far too long.  So, as is often the case, when TLC Book Tours provided me the opportunity to review Shriver’s most recent novel, The New Republic, I happily signed up.  I didn’t enjoy The New Republic but I thought it was an interesting and well-written book. It’s about a few things: journalists and the lengths they’ll go to for a front-page story; terrorism and how it pervades every continent and country; politics and the means some activist groups use to make themselves heard; how people – especially journalists – fill the time while waiting for something to happen but mostly, this book is about the main character, Edgar Kellogg.


The protagonist, Edgar Kellogg, is 37 years old and recently quit his lucrative career as a corporate lawyer to be a journalist.  He isn’t a very likable character, tending to be snide, arrogant and cynical as well as insecure. He wasn’t popular as a corporate lawyer (who is?) and he’s decided to pursue a career in journalism.  He believes it’ll get him a lot of love especially since Toby Falconer, the BMOC from high school, whom Edgar adored and was obsessed with, is a journalist. Edgar hasn’t spoken to Toby for 20 years but he’s followed Toby’s byline in the paper. He has no qualms about calling Toby for a connection at his paper, the “National Record” because Edgar’s that self-absorbed.  He’s sure Toby has amassed friends in every port from traveling around the world writing articles. That’s what Edgar has always wanted most: popularity.  He’s only managed, so far, to be the follower.  The adorer and not the adored.  Part of Edgar’s problem is he gets bored easily and doesn’t like most people, but he’s convinced being a journalist will give him the life he wants.


Edgar’s dreams of a glamorous life as a journalist are shattered before he even gets on the plane.  His interview with the “National Record” and his subsequent drink with Toby make it clear there’s not much glamour in journalism. Guy Wallasek, editor of the “National Record”, calls journalists “parasites” and “histories secretaries”.  He also warns Edgar that journalists don’t have an opinion of their own - they simply report what happens, and more often than not it’s something depressing or outright morbid. Most of the time, journalists are just waiting around, “chewing at the bit” for a story to write. Shriver shares this in the second chapter, shortly after two quotes that open the book, one from Conrad Black, the other from George Orwell, that criticize journalists.  As the book continues, we meet plenty of journalists and nothing they say or do puts them in a good light.  One thing’s for certain: there’s nothing glamorous about where Edgar’s been assigned by the “National Record”.  Barba, the very bottom of Portugal, is excessively windy, boring and covered with prickly pears.  But the journalists camped out there are happy to remain so long as the SOB continue to explode bombs around the world, giving them fodder.  Maybe this is why Shriver doesn’t like journalists.  In The New Republic, their moral center, if it exists at all, is badly skewed.


When Edgar arrives on Barba and hears more about the missing Barrington Saddler, try as he might, Edgar cannot ignore all the talk.  He’s intrigued but also jealous. After all, Saddler is larger than life, adored by one and all. Edgar has basically assumed Barrington’s life. He lives in Barrington’s very large and ostentatious house, eating and drinking his gourmet sundries, driving Barrington’s SUV and even wearing some of his luxurious clothes. It was easy to see where this story was going, at least part of it. Despite himself, Edgar is smitten with Barrington (a man he’s never met) and emulates him.  Soon, Edgar conjures up a Barrington apparition to keep him company at night and to discuss the SOB terrorists and related topics. Living in Barrington’s home, using his computer and extensive notes on the SOB and Barba’s history, Edgar discovers a frightening and glorious secret.  To divulge anymore would be to spoil the book.  Once I was over the shock I found the rest The New Republic inconsistent.


Shriver makes it abundantly clear she thinks little of journalists.  She succeeds in making them appear to be a pack of hungry, groveling dogs willing to do just about anything to get their byline in the paper.  This includes manufacturing witnesses to interview and hoping and praying for terrorists to set off a bomb somewhere, anywhere.  But with Edgar and Barrington the story delves into fantasy when Shriver  goes too far to prove her point.  While skewing journalists, Shriver also slams the notion of “boys will be boys” using terrorist bombings as a game of sorts making people’s fears seem inconsequential.  Maybe it’s me, but I don’t think terrorism and bombings are humorous or a topic for satire, not to this degree anyway. The ending is extremely unsatisfying, almost aggravating, in this light.  Some may find it amusing but, ultimately I thought there should have been consequences for Edgar as well as Barrington’s behavior.  But, if the ending is more realistic than I could imagine, meaning Shriver knows a lot more than I can even fathom, it makes the ending something to inspire outrage.  If this is the case, no wonder Shriver skewers journalists.  I think The New Republic is worth reading to decide for yourself what you think about Shriver’s themes and ideas.  And, although I didn’t like this book, it’s made me even more interested in reading Lionel Shriver’s other novels.


Thank you to TLC Book Tours and Harper Perennial for the opportunity to read and review The New Republic.
Posted by Unknown at 12:12 PM