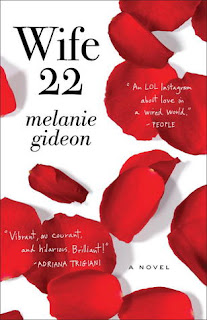 
Book Summary:   Alice has been married to her husband, William, for twenty years.  Though she can still remember the first time they met like it was yesterday, these days she finds herself posting things on Facebook that she used to confide to him. So when she’s invited to participate in an anonymous online survey on marriage and love, she finds that all her longings come pouring out as she dutifully answers questions under the name “Wife 22.”


Evaluating her responses is “Researcher 101,” who seems to listen to her in a way that William hasn’t in a very long time, and before she knows it, she finds herself trying hard not to e-flirt with him. Meanwhile, her elderly father is chatting on Facebook, her fifteen-year-old daughter is tweeting, and everything in her life is turning upside down.


Wife 22 is a hilariously funny, profoundly moving, and deeply perceptive novel about the ways we live and love in this technological age, from a dazzling new voice in fiction.


My Thoughts:   I adored the main character, Alice.  She’s sweet, funny, kind and a little nutty.  She’s also going through a difficult time right now.  Her 20th wedding anniversary is coming up.  Recently, she’s been especially troubled by a growing distance between she and William. They no longer confide in each other, let alone talk about anything deep or personal.  Alice has been busy raising their children, tending the house, being a good mother and a good wife for most of their marriage.  Suddenly, Alice realizes she's been feeling lost, alone, and even a little angry for quite a while.  It doesn’t help she’s about to turn 45, the age her mother was when she died, making Alice even more anxious than usual. What’s more, she has a host of fears and worries about her teenage daughter, Zoe and her 11-year old son, Peter.  Alice worries she’s lost touch completely with Zoe and worries, among other things, this will happen with Peter.


Alice is an extremely likeable character who she can also be infuriating.  She’s not without her faults: she spends more time checking Facebook than talking to her children and William.  She runs away from the problems and people she doesn’t want to face and can’t cope with.  She gets carried away with perceived fears she convinces herself are real and is often cold and unsupportive of William.  Alice’s flaws make her real and human.  What Melanie Gideon has done, superbly, is create a character that is easy to relate to and to understand.  I felt this way even when I didn’t agree with Alice’s behavior.  What makes this so amazing is that everyone one of us knows at least one person like Alice.  One doesn’t often find such a fleshed out character in fiction, where stories are often populated by people of extremes.


Many women will surely see some of themselves in Alice, as well.  Alice’s fears and worries are ones many mother’s share sometimes, if not always.  Because of her inability to confront her fears and deal with her problems, there were times I wanted to throttle Alice.  She escapes into her computer, furthering her disconnection with her children.  And yet these same infuriating dysfunctions make Alice relatable and evoke sympathy, if not empathy.  Ironically, her failure to connect with her family underscores the importance of connecting.  As long as she remains disconnected from those around her, nothing in her life works.  Her disconnection from herself is what ultimately keeps her from realizing this basic truth.  There were plenty of times when I wished I could confront her just to say, “What are you thinking?” or “Stop that!” much as her best friend, Nedra does many times.  Not surprisingly, Alice doesn’t appreciate Nedra’s input.


Wife 22 is an intelligent and clever book filled with funny, laugh-out-loud and poignant scenes, as well as sad passages, heated moments and great dialogue.  Melanie Gideon understands how disconnected couples, family members and friends can become as time rushes by and days turn into weeks which turn into months and then the years fly by.