Review ~ A Friend of the Family by Lauren Grodstein 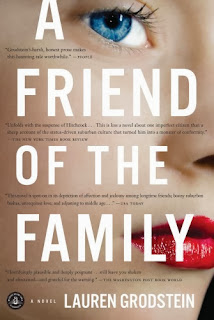 
Book Summary:   Pete Dizinoff has spent his whole life working toward an adulthood that would be, by all measures, judged successful. And in nearly every way, he's accomplished just that: A skilled and intuitive internist with a loyal following of patients, he's built a thriving medical practice in Round Hill, New Jersey. He has a loving and devoted wife, a network of close friends, a comfortable suburban status, an impressive house, a good view from the porch. And most of all, he has a son, for whom he wants only the best. Pete and his wife, Elaine, have only one child, and Pete has pinned his hopes on Alec. They've afforded him every opportunity, bailed him out of close calls with the law, and, despite Alec's lack of interest, even managed to get him accepted by a good college.


But Pete never counted on the wild card: Laura, his best friend's daughter. Ten years older than Alec, irresistibly beautiful, with a history so shocking that it's never spoken of, Laura sets her sights on Alec, who falls under her spell. And with that, Pete sees his dreams for his son not just unraveling but completely destroyed. With a belief that he has only the best intentions, he sets out to derail the romance. But he could not have foreseen how, in the process, he might shatter his whole life and devastate his family.


A riveting story of suburban tragedy in the tradition of The Ice Storm, American Beauty, and Little Children, Lauren Grodstein charts a father's fall from grace as he struggles to save his family, his reputation, and himself.


My Thoughts:   This is a fantastic, thought-provoking book.  Family relationships and the complex job of parenting are the central issues.  Specifically, Lauren Grodstein is asking readers to think about whether or not parents can force their children to make certain choices that will impact their future.  And how much control can parents exert over the choices their children make? The answers to these questions aren’t easy and may depend on the specific situation.  In the case of Dr. Pete Dizinoff, his wife, Elaine and son, Alec, there are some vital facts that need to be known before answering these questions.


Peter Dizinoff is the narrator of A Friend of the Family.  When the novel opens, he’s not living in the house with Elaine and Alec anymore, but in the studio over the garage where Alec used to live and paint (he’s a passionate artist).  We don’t find out until the end what Pete’s done to get himself expelled from his home.  An unreliable narrator, he doesn’t trust the readers and makes us wait until almost the end of the novel to find out both what he’s done and what the malpractice suit is all about.  Over the course of the novel, Pete tells us about himself, Elaine and Alec, their best friends, Joe and Iris and their daughter Laura, about his medical practice and living in Round Hill.  While narrating, Pete complains whines, judges, grandstands and brags.  Oh, he also makes it clear he’s got a thing for his best friend Joe’s wife, Iris!


Still, Pete thinks he’s a nice guy.  I’m not so sure I agree.  He’s arrogant and believes he knows better than most people about what’s right.  He’s very judgmental but because he keeps his judgments to himself, he sees himself as a warm and generous guy.  He's not particularly good at helping out the people close to him when they're in a bad spot.  There was a time when  Joe needed Pete's support.  Pete wasn't comfortable with the situation so he ducked Joe and his phone calls for weeks.  Pete's  not good at listening to others, either.  He's in the midst of a malpractice law suit in which a young woman died.  Had Dr. Pete listened to her, paid her a bit more attention rather than being distracted by his own life, things may have turned out differently.


Peter didn’t trust that young women.  In much the same way, he doesn’t fully trust Elaine or Alec because he believes he knows best. He and Elaine have let Alec do what he wants for a long time.  Alec, for instance, quit school to focus on his art.  His parents built a studio over the garage for him.  Now Pete’s demanding Alec go to college.  Alec doesn’t want to and Pete’s furious.  He refuses to have a real conversation with Alec, he simply yells at him and orders him around.  I think Pete’s position would be more understandable if he was worried about Alec’s future.  But Peter is worried about what neighbors, friends and colleagues will say about him if his son, Alec doesn’t become a big success.  Success and the opinion of people who know him, especially people who live in and around the Dizinoff's upper-middle class neighborhood, has become very important to Pete.  It’s difficult to be sure what’s more important to Pete: Alec or what people think of Pete.


Grodstein’s writing style is compelling and engaging.  She had my attention from the first chapter and I became more absorbed as the novel progressed. I enjoyed the periodic and subtle foreshadowing of events She also makes some brilliant observations of life in the suburbs. She showed a great knack for bringing the upper middle class suburb of Round Hill to life and utterly relatable to anyone whose lived there.  With the manicured lawns, tended gardens and picket fences, with the impressive homes comes competition among the neighbors and parents.  Grodstein successfully develops Peter Dizinoff into a character many readers will recognize from their own lives, especially anyone who lived or lives in the suburbs. Readers may be close to someone like Pete or he may be an acquaintance but it’s not uncommon to know someone who worries, way too much, what friends and neighbors will think of him because of his family’s behavior.  Pete easily resembles men and women who live in upper middle-class suburbs and play the game of “keeping up with the Joneses”.   And the more successful Pete becomes the more closed-minded and judgmental he is of others, even his best friends.


The one part of this book I had some problems with was the ending.  I didn’t think the behavior that gets Pete kicked out of his house would be judged as harshly against him as it is by Elaine, Alec and Pete’s best friends, Joe and Iris.  It’s possible, I suppose, that part of what they were upset with was Pete’s intrusiveness, his failure to stay out of Alec’s life.  Pete would have us believe he was acting in Alec’s best interests but it seems more he was acting in his own interests.  Maybe that’s what Pete’s family was condemning more than the alleged behavior.  And maybe it was time for Pete to be judged after doing so much of it himself.


I highly recommend this book.  It would make a great choice for a book club, too, as there’s plenty to discuss.
Posted by Unknown at 11:50 AM