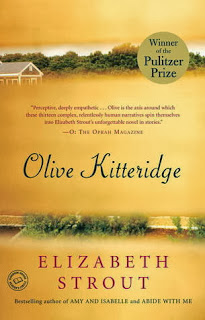 
Book Summary:   At times stern, at other times patient, at times perceptive, at other times in sad denial, Olive Kitteridge, a retired schoolteacher, deplores the changes in her little town of Crosby, Maine, and in the world at large, but she doesn’t always recognize the changes in those around her: a lounge musician haunted by a past romance; a former student who has lost the will to live; Olive’s own adult child, who feels tyrannized by her irrational sensitivities; and her husband, Henry, who finds his loyalty to his marriage both a blessing and a curse.


As the townspeople grapple with their problems, mild and dire, Olive is brought to a deeper understanding of herself and her life–sometimes painfully, but always with ruthless honesty. Olive Kitteridge offers profound insights into the human condition–its conflicts, its tragedies and joys, and the endurance it requires.

My Thoughts:  I read The Burgess Boys by Elizabeth Strout not too long ago (review).  As soon as I finished it I wanted to read Olive Kitteridge, of which I’ve read a lot of great reviews.  Author, Elizabeth Strout, won the Pulitzer Prize in Fiction for Olive Kitteridge so I was very excited about reading it.  I’ve learned in the past it’s not a good idea to start reading a book when I have high expectations for it. I had them when I began reading Olive Kitteridge, I couldn’t help it.  But my expectations were more than met.  I thought this book was a wonderful. Elizabeth Strout’s writing is stunning, her characters are well-developed and real and themes such as forgiveness and acceptance connect the characters and help bring them to life.  I thoroughly enjoyed reading Olive Kitteridge.  I don’t re-read many books but this is one I see myself returning to.


Olive Kitteridge isn’t a very likable person, at first.  She’s irritable and cross, a curmudgeonly type, particularly towards her husband, Henry.  Olive is the character that links Strout’s 13 stories.  Although she isn’t the central figure in all of the stories, Olive is related to, friends with or an acquaintance of the characters in the stories.  Strout brilliantly reveals more of Olive in each story until it’s clear Olive is much more complex than she first appeared.  She’s deeply flawed and has many regrets.  She loves her son, Christopher, deeply, yet most of the time she whines to and nags him. Olive has a lot of empathy for people but she’s much better at expressing it to those she doesn’t know well rather than to Henry and Christopher, for instance.  She doesn’t always understand what’s happening in the lives of her friends, neighbors and family, just as she doesn’t always understand herself. Olive has a difficult time expressing  how she really feels, especially to those closest to her. She often blurts out the opposite of how she really feels in a fit of anger and frustration.  I was a fan of Olive halfway through the stories.  I loved how Strout showed Olive’s softer sides as well as her more prickly parts.  She made Olive very real and easy to feel sympathy for her.


The stories in Olive Kitteridge are heart-wrenching, funny, surprising, and full of despair, joy and confusion. The people of Crosby, Maine are dealing with situations, often upsetting and unpleasant, that feel very real.  It’s easy for us to relate to the characters and their lives because their behavior is that of real human beings.  Strout displays a profound understanding of the human condition and of how messy and awkward life is, at times.  The small details in life that are so important, that make us who we are, enhance Strout’s characters making them difficult to forget because we recognize them and feel we know them. Strout’s writing is beautiful, compelling and sincere.  This is a book  I highly recommend to every reader.  You don’t want to miss it.
Posted by Unknown at 12:57 PM