The Price of Life by Greg McCarthy 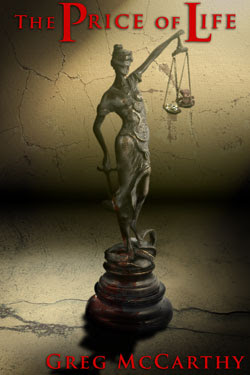 Summary: Eight-year-old Jennifer Haller’s brain tumor is killing her. A timely CT scan would likely have saved her, and a new surgery offers hope for a cure, but Julie Haller is crushed when their insurance company refuses to pay for her daughter’s operation.

Shortly after Jennifer’s diagnosis, Marine Captain Ed Haller loses his leg to a roadside bomb in Iraq. He comes home to rehabilitate while Jennifer wages her own losing battle with cancer and its treatment. Jennifer’s death leads the family to Fort Worth lawyer Grant Mercer, whom they hire to sue Jennifer’s neurologist.

As Mercer works the case, Julie Haller learns the results of recent tort reform efforts, including a $250,000 limit in medical malpractice cases. She and her husband realize that a quarter-million dollar price tag on a beloved eight-year-old girl is simply inconceivable. They have no interest in the money, focusing instead on their responsibility to honor their daughter by seeking justice for her death.

The murders of a lobbyist in Austin, a state senator on a remote country road, and an insurance executive in New York seem unrelated until Jennifer’s doctor is kidnapped. Mercer makes the disturbing connection between the victims and his case, and discovers how far some people will go when the usual avenues of justice are too sharply curtailed.


My review: The Price of Life is a gripping and intense murder mystery that tugs at your heart-strings. A family has suffered an unspeakable tragedy and is hoping for justice. But the Texas legislature and a greedy insurance company stand in their way. As the story progresses you might wonder whose side you're on while you read late into the night unable to put down this thrilling mystery!

Greg McCarthy's debut novel is also an eye-opening look at the tort reform laws passed by the Texas State Legislature. For the most part, these laws have eliminated medical malpractice cases by capping the amount of non-economic damages a jury can award. Plaintiffs can no longer receive more than $250,000 in punitive damages no matter how egregious a doctor's behavior or how much the plaintiff has been emotionally, mentally or psychologically harmed by medical malpractice.

While reading a mystery, I enjoy trying to figure out who is doing the killing and following along with the detectives' investigation as they narrow down the suspect list, eventually apprehending the murderer. Here, McCarthy ingeniously and very subtly suggests a suspect. It seems so obvious that this character is guilty except for one reason. But if not him/her, then who? McCarthy does a wonderful job of keeping things well paced, making us turn the pages as we are immersed in entertaining and interesting dialogue, spoken by captivatingly well-defined and real, recognizable characters. The reader will identify with some for their warmth and inquisitiveness or maybe their suffering. And then there are those without which no murder mystery would be complete: the vile and putrid "bad guys." Even when the case seems wrapped up and the end is near, McCarthy surprises us with a bone-chilling twist that's you won't soon forget. It's the kind of ending that makes the book worth reading simply because you don't see it coming. Add it all up and the author has created a successful legal thriller that works on many levels from the suspenseful and gripping murder mystery to the political and social commentary not often found in the mystery genre, and several levels in between. I highly recommend this book for anyone who enjoys an intelligent, thought-provoking and exciting legal thriller.

I received an ARC copy of The Price of Life from Kelley & Hall Book Publicity.
Posted by Unknown at 6:38 PM