Book Review: Everything Beautiful Began After by Simon Van Booy 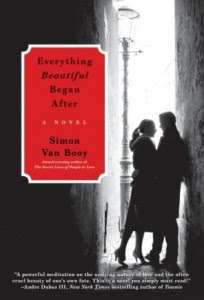 Everything Beautiful Began After by Simon Van Booy

Publisher: Rebecca is young, lost, and beautiful. A gifted artist, she seeks solace and inspiration in the Mediterranean heat of Athens—trying to understand who she is and how she can love without fear.
George has come to Athens to learn ancient languages after growing up in New England boarding schools and Ivy League colleges. He has no close relationships with anyone and spends his days hunched over books or wandering the city in a drunken stupor.
Henry is in Athens to dig. An accomplished young archaeologist, he devotedly uncovers the city’s past as a way to escape his own, which holds a secret that not even his doting parents can talk about.

...And then, with a series of chance meetings, Rebecca, George, and Henry are suddenly in flight, their lives brighter and clearer than ever, as they fall headlong into a summer that will forever define them in the decades to come.


My review: Everything Beautiful Began After is a story filled with intense emotion: the characters experience the greatest happiness and the utmost .despair as well as everything in between. Rebecca, George and Henry are foreigners living alone in Athens until they find each other. They are each struggling with deep pain from a past occurrence or conflict they have not yet resolved within themselves. They recognize the well of sadness and pain in each other. Its impact on their lives, rather than separate them, it bonds Rebecca, Henry and George to one another. This is even more remarkable considering George and Henry are both in love with Rebecca who's only in love with Henry. The friendship of Rebecca and Henry is more important to George, a sweet man who has spent much of his life alone, than a romantic relationship with Rebecca. And in George, Henry feels he's found a brother. This connection is of vital importance to Henry as the story progresses. In the first of three books, Rebecca, Henry and George take full advantage of all that Athens has to offer, reveling in their friendship and love, happy to be together.

I rarely include passages from the book in my review but I wanted to share an example of Mr. Van Booy's beautiful prose. Shortly after George, Henry and Rebecca first spend some time together:
George looked out into a drowning world. In the reflection of the glass he could see the outline of a man, a few lines, a specter suspended by light and dark, by falling rain. A life that was yet to be decided, despite everything that had already happened, every moment is yet to be decided and connected to the one before it by illusions.

I don't want to go into any more detail about the plot because I think Mr. Van Booy's book has a greater impact if you don't know the plot beforehand. I didn't and at one point I gasped out loud! What I will gladly tell you is how beautiful i found Mr. Van Booy's writing. His prose took my breath away. When I first started reading the book, it didn't matter to me what the story was about, I just wanted to continue experiencing the way Mr. Van Booy combines words. His sentences flow smoothly with elegance and grace whether he's describing Rebecca's day at the Monastiraki flea market in Athens or Professor Peterson, Henry's teacher, clipping George with the fender of his Renault while driving. Mr. Van Booy's descriptions are so detailed and distinct I felt I was in Rebecca's apartment with her and at the beach in Piraeus with Rebecca, Henry and George. Mr. Van Booy doesn't describe them so much as let us come to know and understand them through their actions, thoughts and dialogue. This had the affect of making me feel like I'd met them.

Mr. Van Booy has a remarkable ability to combine the past with the present and show us how one influences the other. In the same way, our past experiences impact who we are now. Our connections to others, our love for them and theirs for us enables us to see clearly and to make sense of the chaos of life. As Rebecca, George and Henry discover, pain, loss and grief can get in the way and block our view. Mr. Van Booy shows us how these emotions and experiences make us stronger, give us hope for the future and help us to appreciate all that is good about life. I highly recommend Everything Beautiful Began After. I'm already looking forward to re-reading this book as well as reading Mr. Van Booy's other books. You don't want to miss it.

Thank you to TLC Book Tours for the opportunity to review Everything Beautiful Began After and thank you to Harper Perennial for a copy of the book.
Posted by Unknown at 9:36 AM