Feature Presentation... MONDAY MOVIE MEME
The Bumbles and thus, Monday Movie Meme, are on hiatus right now because they've had an exciting happening in their family ~ the birth of beautiful Samuel Morgan on July 27th! Trust me, you want to stop by The Bumbles Blog and see the adorable Samuel! 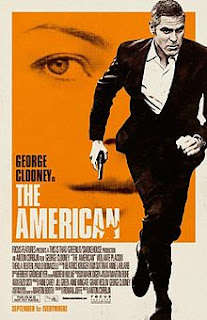 I figure I'll tell you about a movie I saw recently (thank you Netflix!) and I really enjoyed although generally it hasn't been a big audience pleaser. The movie is The American starring George Clooney, Paolo Bonacelli and Violante Placido and directed by Anton Corbijn. It's based on the book A Very Private Gentleman by Martin Booth. Clooney plays Jack, assassin-for-hire, an American currently working in Europe. A job in Sweden is a bit of a fiasco. Jack vows to his contact, Pavel, that his next job will be his last. It seems his head may no longer be in the game, which is usually the undoing of an assassin-for-hire. Jack sequesters himself away in a small town in the Italian countryside and enjoys being away from the job of death for a while. He befriends a local priest and begins spending time with a young woman, Clara< he first meets when seeking out a prostitute! Despite quiet days and nights, Jack's guard his up, his well-honed radar is telling him not to get too comfortable. too soon he's contacted about the next, and according to Jack, his last job, by Mathilde a woman who wants Jack to build a custom-designed sniper rifle to be used in an assassination. Jack builds a perfect rifle but he doesn't know who he can trust anymore...is he being paranoid? Will he figure out in time who's after him? Is anyone really after him?


This movie is called a thriller which I suppose it is but it's not a fast-paced, action-packed movie. It moves at a slower pace than many thrillers. The saying, 'the devil is in the details" applies here ~ this movie is all about subtlety and you need to pay attention to the details, it's where the answers lie. The dialogue is important, too, what's being said as well as what isn't and you want to watch Jack: his actions, his behavior and his facial expression, in particular. This is a thoughtful, thought-provoking movie which s what I enjoyed about it. The scenery and backgrounds is also beautiful. The ending shocked me, too! It wasn't what I wanted but it went with the movie!
Posted by Unknown at 10:54 AM