First Chapter First Paragraph Tuesday Intros is a weekly meme hosted by Diane at Bibliophile by the Sea every Tuesday. To participate share the opening paragraph or two of a book you've decided to read based on that paragraph. This book has been on my shelf for a long time. Maggie O'Farrell is one of those authors I've always wanted to and meant to read. I've been trying to read the books that I've collected because I want to read them and yet, they've been sitting on my shelves...waiting. It's a lot of fun! 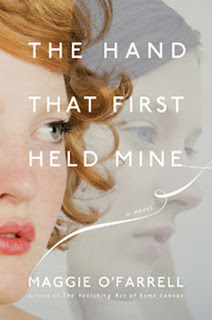 The Hand that First Held Mine by Maggie O'Farrell

Listen. The trees in this story are stirring, trembling, readjusting themselves. A breeze is coming in gusts off the sea, and it is almost as if the trees know, in their restlessness, in their head-tossing impatience, that something is about to happen.

The garden is empty, the patio deserted, save for some pots with geraniums and delphiniums shuddering in the wind. A bench stands on the lawn, two chairs facing politely away from it. A bicycle is propped up against the house but its pedals are stationary, the oiled chain motionless. A baby has been put out to sleep in a pram and it lies inside its stiff cocoon of blankets, eyes obligingly shut tight. A seagull hangs suspended in the sky above and even that is silent, beak closed, wings outstretched to catch the high thermal draughts.

The house is set apart from the rest of the village, behind dense hedge, on the crest of a cliff. This is the border between Devon and Cornwall, where the two counties crouch, eyeing each other. It is a much-disputed piece of land. It would not do to look too long at the soil here, soaked as it will be with the blood of Celts, Anglo- Saxons, Romans, filled out with the rubble of their bones