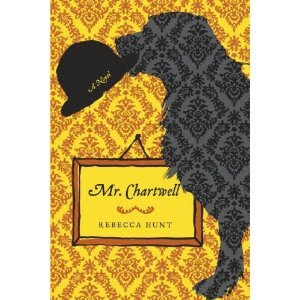 Publisher’s Book Summary: July 1964. Chartwell House, Kent: Winston Churchill wakes at dawn. There’s a dark, mute “presence” in the room that focuses on him with rapt concentration. It’s Mr. Chartwell. Soon after, in London, Esther Hammerhans, a librarian at the House of Commons, goes to answer the door to her new lodger. Through the glass she sees a vast silhouette the size of a mattress. It’s Mr. Chartwell. Charismatic, dangerously seductive, Mr. Chartwell unites the eminent statesman at the end of his career and the vulnerable young woman. But can they withstand Mr. Chartwell’s strange, powerful charms and his stranglehold on their lives? Can they even explain who or what he is and why he has come to visit?

In this utterly original, moving, funny, and exuberant novel, Rebecca Hunt explores how two unlikely lives collide as Mr. Chartwell’s motives are revealed to be far darker and deeper than they at first seem.
My Thoughts: I thought Mr. Chartwell would be an innovative and creative story when I first read it's summary. When I received an ARC of Rebecca Hunt’s debut and fully understood what the book is about, I’ll admit I was a little skeptical because the book requires the reader to accept something intangible as real. It’s documented that Winston Churchill suffered periods of depression throughout his life and he referred to this depression as “black dog”. Rebecca Hunt manifests depression in her novel as an actual Black Dog called, as the title suggests, Mr. Chartwell or, in full, Black Pat Chartwell. Chartwell was the name of Winston Churchill's home in Kent, England. My skepticism was unnecessary and a waste of time. Rebecca Hunt's debut is a captivating and exceptional story that portrays depression as a living, breathing entity both despicable and amusing. The story is brought to life through quirky characters, witty, engrossing dialogue and an ingenious story-line. It’s deceptively simple and fun but by the time you finish reading it, you’ll realize Mr. Chartwell is a rich, engrossing book about an important issue and it will stick with you for a long time.

The star of the novel, for me, is Black Pat, an extremely large, somewhat revolting, black dog. He is egocentric, witty and intelligent. He also has a cruel, nasty side that he's adept at concealing when it suits him. Ms. Hunt does an amazing of job of making Black Pat a combination of dog and man and I found the passages describing his daily activities such as eating, sleeping and bathing interesting, laugh out loud funny, as well as gross! Much of the novel's comic aspects come from Black Pat. The dark, sinister aspect of his personality is more subtle and it wasn't until I'd read a substantial portion of the book that I recognized it. In the chapters where Black Pat visits with Winston Churchill, he is implacable, harsh and reprehensible, yet we sense a mutual respect. Ms. Hunt successfully conveys the unrelenting nature of depression by describing the things Black Pat does when he‘s with Winston Churchill. He chews on rocks and lies across Churchill. When I stopped and thought about what Black Pat was doing to Churchill I shuddered to think how demoralizing it must be living with him for a lifetime.

Ms. Hunt provides an interesting contrast in Black Pat's behavior with Esther Hammerhans, a young woman who permits Black Pat to stay with her almost against her will. He is witty, teasing and entertaining in Esther's presence. Black Pat's idea of flirting is engaging but also wearying and very effective. Esther is sad, confused and uncertain about her life. She's haunted by a recent tragedy, unsure of how to come to terms with it and move on with her life. Black Pat seems to know more about Esther than he admits. He uses her debilitated state to his advantage and exhausts Esther with his behavior and chatter. As the story progresses, Black Pat's attraction to Esther becomes clear at which point his previously engaging behavior appears loathsome and unkind. When Black Pat thinks Esther's figured him out an unexpected desperation and sadness similar to Esther's overcomes him. Esther finds it difficult to reject Black Pat. He offers her a connection to her past that nobody else can but if she accepts him she stands to lose everything.

I thought this book was a quick, amusing read but almost too entertaining and light, particularly the first half of the book. The dialogue is often too cute with much bantering between characters. Black Pat enjoys creating nonsensical rhymes and makes references to the "game" he's playing. In several chapters, Churchill and his wife call each other Mr. Pug and Mrs. Pussycat. Additionally, several of the secondary characters are too eccentric. Esther's friend from work is a socially inept man, Corkbowl, who tends to make others awkward and uncomfortable when he speaks and her friend Beth is extremely blunt, pushy and has no concept of personal space. Beth, despite being Esther's close friend, doesn't have a clue about her despair and inner turmoil.

The dark side of Black Pat's behavior initially only shows up in the chapters with Churchill, of which there are few and most short. The majority of the book focuses on Esther's relationship with Black Pat and with her friends, most of which is animated and lively. I didn't feel the morbidity of Black Pat until I sat and thought about what he was doing to Churchill and later on in the book, to Esther. Ms. Hunt's novel doesn't lend itself to much introspection because it is so amusing.

I would have liked some more chapters about Churchill and Black Pat's relationship. Black Pat has been a part of Churchill's life for a long time and now that Churchill’s 87 years old, there's a long history between them. I also hoped for more about Esther's life, especially her past. I don't want to give away important parts of the book so I'll just say that when Esther finally has an epiphany about Black Pat, I thought she would look back on her life over the last several years. Unfortunately, the author leaves this thread dangling rather than take what seems a good opportunity to tie the individual stories together.

Overall, I thought Mr. Chartwell was enjoyable with an exceptional and creative story. Ms. Hunt's prose is wonderful and she has a talent for writing innovative metaphors that, aside from a few awkward sentences, provided great descriptions and explanations throughout. I think Ms. Hunt took a risk writing about depression in this way, but she succeeded. Readers familiar with depression will likely find Mr. Chartwell a more substantial read than those who have no experience. This is a book that I would recommend to many different people and I think it's great for book clubs as it offers several areas for discussion. I just can't imagine that there wouldn't be as many varied opinions about Mr. Chartwell as there are people who read it. I’m looking forward to other books by Rebecca Hunt and hope she writes one soon!
Other reviews of Mr. Chartwell: Farm Lane Books Blog, She Reads Novels, Savidge Reads

I received an ARC of Mr. Chartwell from the publisher.
Posted by Unknown at 11:29 AM