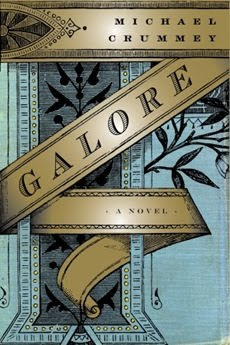 
Book Summary: When a whale beaches itself on the shore of the remote coastal town of Paradise Deep, the last thing any of the townspeople expect to find inside it is a man, silent and reeking of fish, but remarkably alive. The discovery of this mysterious person, soon christened Judah, sets the town scrambling for answers as its most prominent citizens weigh in on whether he is man or beast, blessing or curse, miracle or demon. Though Judah is a shocking addition, the town of Paradise Deep is already full of unusual characters. King-me Sellers, self-appointed patriarch, has it in for an inscrutable woman known only as Devine’s Widow, with whom he has a decades-old feud. Her granddaughter, Mary Tryphena, is just a child when Judah washes ashore, but finds herself tied to him all her life in ways she never expects. Galore is the story of the saga that develops between these families, full of bitterness and love, spanning two centuries.
With Paradise Deep, award-winning novelist Michael Crummey imagines a realm where the line between the everyday and the otherworldly is impossible to discern. Sprawling and intimate, stark and fantastical, Galore is a novel about the power of stories to shape and sustain us.


My Thoughts: I read Galore by Michael Crummey as part of a Blogger Book Club being hosted tomorrow by Jen at Devourer of Books. I was excited about Galore because summaries described a creative, unique book about interesting, odd characters on a remote island of Newfoundland. My expectations were met, at first, but before I reached the halfway mark my interest waned. Galore isn’t a narrative with a typical storyline, ie; plot, crisis, resolution. It’s a series of stories about the people who inhabit the remote island of Paradise Deep. And that's all it is, a series of stories.

Mr. Crummey combines real life with fable and fantasy using quirky people in a harsh, wild setting to grab your attention. Stories are told about a family, friends and neighbors, or people who just plain don't like each other, all by a third-party omniscient narrator. Unfortunately we never get to really know any one character enough to identify, understand, relate to or care for them. One reason is because arcs of various island inhabitants are suddenly dropped and forgotten for hundreds of pages. Another reason is we're told about various characters' behavior without insight into their thoughts, feelings or motivations.

A perfect example of this is Judah, who I thought was going to be one of the "main" and most interesting characters in the book. Judah is cut out of a whale beached on the shore of Paradise Deep in the first few pages. He's a mute albino to whom some of the islanders attribute a wealth of fish at a time when they had been scarce. As such they call him the Great White. Some islanders are repulsed by him because of his strange appearance and the terrible smell that's always with him. On at least two occasions Judah is blamed for crimes he didn't commit simply because the Sellers men, the wealthiest family on Paradise Deep, don't like Judah. I thought Judah might be a symbol for truth but as the novel progresses too few stories are told about him for me to have formed any solid opinions. Then, seemingly out of nowhere comes the day he makes a huge sacrifices is locked up alone for life. Again, we are not privy to why he does what he does or what he's thinking or feeling. In fact, the last quarter of the book barely mentions Judah at all.

Mary Tryphena Devine is one of the characters we are told the most about. When Galore begins Mary is nine-years old. Many of the stories include actions taken by Mary Tryphena or she's present at events that happen on the island, but, again we're given little insight into her character. We learn that she's a believer in many of the fables and folklore that people bring to the island and that have been passed down through her family. This is a very interesting aspect to her. But Mr. Crummey doesn't complete this character : we never learn how she feels about things, why certain things bother her why others don't, for example her marriage is never explored from her point of view which left me extremely frustrated.

Mr. Crummey is a talented writer of elegant, lyrical prose which makes it more frustrating that this book is so unsatisfactory. It's a tease to read about such offbeat characters we never really get to know or stories that hint at these characters' fascinating lives that fall flat or end up going nowhere. When Galore opened with a mute albino being cut from the gut of a beached whale I thought, "This is going to be a fascinating character" but he isn't because he can't speak. And for some reason, Mr. Crummey chooses not to let us in on his thoughts or how he wound up in the whale in the first place! The fact he can write isn't revealed until about three-quarters of the way in, and even then, we never find out his back story! I enjoy interesting, well-developed characters whose thoughts, feelings and beliefs I can discern and comprehend because that makes them seem real. I don't have to like them. In fact, some of the most fascinating characters I've read about I didn't like at all! There are nice characters and cruel characters in Galore but we aren't provided any understanding of or insight into them. As a result, Galore becomes boring and tedious after a while, and ultimately, frustrating and unsatisfactory. Maybe it would have worked better as a collection of short stories?

Tomorrow, Tuesday April 26th, the blogger Book Club is going to discuss Galore and I will be updating this review with the thoughts and comments of the other bloggers who read the book.
Posted by Unknown at 2:55 PM