Short Story Review: The Springs of Affection by Maeve Brennan 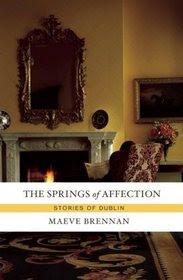 I discovered The Springs of Affection: Stories of Dublin by Maeve Brennan at a used bookstore in downtown Brooklyn. I wasn't familiar with this Irish author who worked for The New Yorker for many years, but after looking through the book, I had to have it!

The Springs of Affection, the title of a long short story (47 pages). Min Bagot is 87 years old and the last surviving member of the Bagot family. Her twin brother, Martin, died recently and Min has just returned to her flat in Wexford. She had been living with Martin for six years, ever since the death of his wife, Delia. Min initially makes it sound as if she sacrificed a great deal to leave her home and move in with Martin to care for him. As the story progresses, Min admits that she voluntarily moved in with Martin and stayed against her brother's wishes!

Min reminisces about her Irish family, her mother, Bridget and father, whom she never names, her two sisters, Clare and Polly and Martin. Min sounds self-righteous, angry and jealous for most of the story. She is against marriage and believes the right thing is staying with one's immediate family. Min is the only sibling who didn't marry. She prides herself on being loyal to the family.
"And she thought it was fitting that she should be the one to remain alive, because out of them all she was the one who was always faithful to the family. She was the only one of the lot of them who hadn't gone off and got married. She had never wanted to assert herself like that, never needed to. She had wondered at their lack of shame as they exhibited themselves, Clare and Polly with their husbands, and Martin with poor Delia, the poor thing."
Min blames Martin, but even more, Martin's wife, Delia for destroying Martin's opportunities in life and their family.
"But all that hope ended and all their hard work was mocked when Delia Kelly walked into their lives. She smashed us up, Min thought, and got us all out into the open where blood didn't count anymore, and where blood wasn't thicker than water, and where the only mystery was, what did he see in her."
Min finds fault with and complains about almost everyone although she's very loyal and loving towards her mother, Bridget. In the midst of criticizing her father, we learn that Bridget was more than a strong independent woman. She was a bully.
"She didn't like it when her mother started fighting, and sometimes it seemed she was always fighting."
Min recounts a disturbing, unpleasant scene in which Bridget bullied her husband in front of their children to get him to stop wearing a hat she didn't like. Shortly after that Bridget bought a sewing machine and learned to sew.
"Min was the one who helped her mother, so Min was sentenced to a lifetime of sewing, when she had her heart set on going to a college and becoming a teacher."
Min's feelings towards her mother are obviously complex as is so often the case for many women. I imagine she feels abandoned by her siblings who left to live their lives never noticing that Min was stuck at home. Much of this story revolves around Martin's wedding day, probably one of the worst days of Min's life.
"She had known perfectly well that the day would be hateful, but she had not known that it would all be so unnatural, or that she herself would feel worn and dry and so unable to manage, because the only thing she wanted was to escape from it all, and she couldn't leave her mother's side."
I think Min blames Martin for many of the things she doesn't like in life and feels he abandoned her and let her down. She vacillates between being angry at him, feeling sorry for him and not caring about him at all.
"But Min could not really have been accused of holding a grudge against Martin. She could be angry with him, but she couldn't hate him or even dislike him" and "Martin behaved as though he had forgotten she was alive."
Min is an interesting, complex and intelligent woman who twists things around in her head until they suit her view of life and the world. She goes to some remarkable lengths to make things the way she wants them. Only at the end does it become clear how very sad and lonely Min is and how much she wishes for things to be the way they were long ago...or, really, the way she's convinced herself they once were.

There is so much more to this story but I don't want to give any more away. Maeve Brennan has created a very human, understandable character in Min. She's flawed but it's hard not to feel for her. I'm not sure I like Min Bagot, but she's certainly fascinating.

Ms. Brennan's writing is simple, straightforward and subtle. There's an elegance and depth to her writing and, although I haven't read all of the stories in The Springs of Affection, the few I've read are hard to forget.
Posted by Unknown at 11:20 AM