First Chapter First Paragraph Tuesday Intros is a weekly meme hosted every Tuesday by Diane at Bibliophile by the Sea. Share on your blog the opening paragraph (maybe two) of a book you decided to read based on the opening paragraph(s). The book I've chosen is on Tour with TLC Book Tours next month.
After reading the paragraphs from my book below, be sure to drop by Bibliophile By the Sea and read Diane's terrific selection this week and visit the other participants in this great meme! 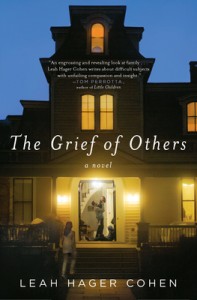 When he was born he was alive. That was one thing.
He was a he too, astonishingly - not that anyone expected him to be otherwise, but the notion of one so elemental, so small, carrying the complex mantle of gender seemed preposterous, the designation "male" the linguistic equivalent of a false mustache fixed above his infant lip.
His lips: how barely pink they were, the pink of the rim of the sky at winter dusk. And in their curl - in the way the upper lip rose to peaks and dipped down again, twice, like a bobbing valentine; and in the way the lower bowed out, luxuriant, lush, as if sated already from a lifetime of pleasures - how improbably expressive were his lips.
His hands like sea creatures curled and stretched, as if charged with purpose and intent. Five of his fingers closed around one of his mother's and held it while he slept. He was capable of this.

What are your thoughts about these 2 opening paragraphs? Would you read this book based on these paragraphs?
Posted by Unknown at 10:58 AM