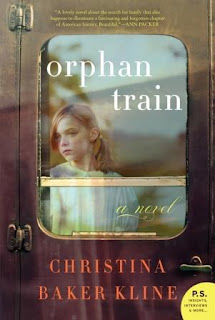 
Book Summary:   Between 1854 and 1929, so-called orphan trains ran regularly from the cities of the East Coast to the farmlands of the Midwest, carrying thousands of abandoned children whose fates would be determined by pure luck. Would they be adopted by a kind and loving family, or would they face a childhood and adolescence of hard labor and servitude?
As a young Irish immigrant, Vivian Daly was one such child, sent by rail from New York City to an uncertain future a world away. Returning east later in life, Vivian leads a quiet, peaceful existence on the coast of Maine, the memories of her upbringing rendered a hazy blur. But in her attic, hidden in trunks, are vestiges of a turbulent past.

Seventeen-year-old Molly Ayer knows that a community-service position helping an elderly widow clean out her attic is the only thing keeping her out of juvenile hall. But as Molly helps Vivian sort through her keepsakes and possessions, she discovers that she and Vivian aren’t as different as they appear. A Penobscot Indian who has spent her youth in and out of foster homes, Molly is also an outsider being raised by strangers, and she, too, has unanswered questions about the past.

Moving between contemporary Maine and Depression-era Minnesota, Orphan Train is a powerful tale of upheaval and resilience, second chances, and unexpected friendship.


My Thoughts:  I have never heard of orphan trains and have no recollection of learning about them when studying early 20th century American history.  This seems so strange to me, as well as sad, considering these were neglected, abandoned children, lonely and alone, in our country.  I just can't imagine being an innocent 10-year old little girl, such as Niamh (pronounced Neev), who is suddenly all alone in a big city like New York, her parents and siblings gone from her life for in an instant  It sounds frightening to me, an adult who lives in the city, and it's simply a heart-breaking story.
Niamh is the main character in Orphan Train.  Christina Baker Kline does a wonderful job portraying the physical and emotional hardships experienced by the children who are a part of the orphan train group.  They are deeply connected to one another despite not knowing each other well.  Kline makes it clear through Niamh and the other characters how different the prevailing attitudes were towards homeless, abandoned and orphaned children in the early 20th century in contrast to today.  Niamh and thw other children feel ashamed and humiliated.  They're expected to appreciate anyone who gives them a home and any home they get despite the conditions or the treatment. Niamh's journey from the day she steps on the bus to the day she's married is sad, poignant, heart-warming and fascinating.  It's also similar to the situations many of the other children encounter, although they all have their differences.
This book is well worth reading for the period of American history it details.  Kline has written an absorbing account of one little girl's remarkable life.  I'd hoped to learn more about the modern day 'orphan', Molly, who helped Niamh recount her remarkable life.  If we're lucky, maybe Kline will  revisit Molly in another novel.
Thank you to TLC Book Tours and William Morrow for the opportunity to read and review Orphan Train.
Posted by Unknown at 12:42 PM