In the land of the green!

My love of reading comes from my mom. She always had a book and anytime she had even just 5 or 10 minutes, she was reading. I always picture her swinging in the hammock in our backyard completely absorbed in a book or stretched out on the chaise lounge on our patio, pretty pink flowers from the dogwood tree falling around her, a thick hardcover book in her hands or, in the colder months, sitting in her favorite club chair in our family room, her feet up on an ottoman or resting on our Golden Retriever, Sasha, fully engrossed in James Joyce's Ulysses. For a large part of my childhood my mom was reading James Joyce, among other things. She loved Joyce but was also, occasionally, aggravated by him and his writing! When she read Ulysses she decided she didn't get enough out of it so she re-read it while reading a critique of it! She passed on to me her love of Joyce. I have to admit, though, that I have yet to completely tackle Ulysses but I will one day, I will! I've read many of his other books, A Portrait of the Artist as a Young Man, Finnegan's Wake and Dubliners, my favorite partly because mom and I read it together. I wrote a mini-thesis on James Joyce for an advanced english class in high school. It was challenging, fun and very enlightening. Joyce was a complex man simultaneously in love with Ireland while despising it.
At the height of her Joyce passion my mom decided we were going to Ireland. My family wasn't one for B&Bs. Mom wanted us to see many different towns and cities in Ireland and, although she wanted to see Joyce's Dublin, it wasn't the focus of our trip. After doing some research mom decided we were going to rent a house in a little town and from there travel around sight-seeing. She wanted us to have a base, a place to return to after a long day of poking around and somewhere to completely relax on days we didn't want to sight-see. Mom also wanted to get to know the towns-people and our neighbors and experience, just a little bit, an aspect of Irish life. 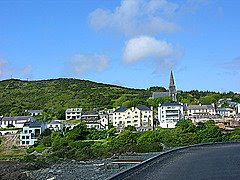 We rented a 3-bedroom house in a small village called Claddaghduff, north-west of Clifden. Clifden is a town on the coast of County Galway, north of the city of Galway and situated in 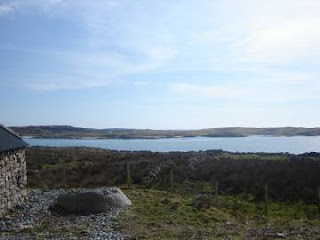 Connemara. Clifden is considered the "capitol of Connemara", the name given to the western portion of County Galway. (An interesting point is it is difficult to locate Connemara on a map because it is not an administrative entity like a town or village). Connemara is one of the most beautiful areas of Ireland offering dramatic viewsof the sea, the mountains, lakes and the bog. It is dominated by the breath-taking Twelve Bens Mountain Range and bounded on the west, south & north by the Atlantic coastline. 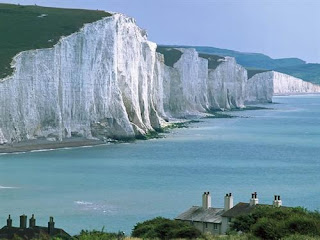 Claddaghduff was so small it had one general store, a small post office, a catholic church and, of course, a pub. It is almost completely surrounded by water and has some beautiful beaches and lovely seascapes. Keep in mind I was there over 20 years ago ( 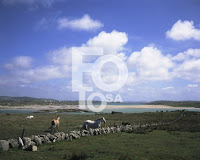 Claddaghduff now serves as a gateway to Omey Island, a tidal island you can walk across the sand to reach at low tide, at high tide you need a boat. There's even a street sign in the sand warning of this that is almost completely covered up at high tide. lol Omey Island is the site of a monastery and settlement founded by St. Feichin. Archaeologists have been studying the monastic heritage of the island since the early '90's. The Island is still a place of devotion to St. Feichin.

My family really enjoyed staying in our little Claddaghduff cottage. We took several day trips and went to Dublin for 3 days. It was fun to return to the cottage after being away for a few days. Several nights we went to the local pub, my parents had Guiness, my sister and I got to know the townspeople and listened to the live music, every night someone played an instrument and people sang Irish songs while drinking! On the 2 Sundays we were there we went to Sunday Mass. It was only 24 minutes long as opposed to the hour long mass we were used to. My father got a big kick out of telling people that the priest got up from his chair behind (and set back from the altar) and as he walked towards the altar he started saying Mass. Well he spoke so quickly that by the time he reached the altar he was already at the sermon (the sermon is about halfway through the mass)!
We went to Ireland in the month of August and were blessed with what the Irish people called a "heat-wave" - it was in the high-70s and sunny or overcast. So we went to the beace one day; another day my sister went horse-back riding on the beach after discovering that the people we were renting the house from owned horses. 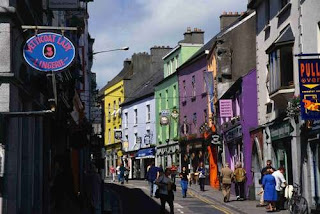 Most days we went for a drive to check out a new spot. We spent a day in Galway, I adored Galway. At the time it was 2 streets filled with shops, pubs and restaurants. It was bustling but not packed and the people were so nice! 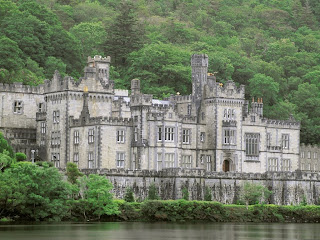 Another day we spent at Kylemore Abbey and Gardens, an unbelievably large, stunning country home built in 1868 for the family of Mitchell Henry who was the MP of Galway from 1871 to 1885 It was sold to the Benedictine nuns in 1920. There is also a secondary girls boarding school on the premises that the nuns decided to close next year. I cannot imagine going to school in such a gorgeous setting! 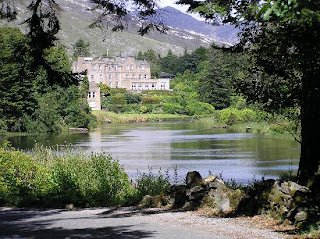 We also spent a day touring around Clifden, Connemara and Ballyconneely, beautiful wild countryside south of Clifden surrounded by beaches. We stopped at Ballynahinch Castle for lunch. It is a luxury hotel that was once the sporting estate of the Martin Family. The grounds are breath-taking and many different activities including golf and horse-back riding are offered.

We drove Sky Road one day. Sky Road an 11-km drive along Clifden Bay and Streamstown Bay rising more than 150 m above sea level at Slyne Head, with views of Atlantic, Clifden Castle, coast-guard station, the islands of Inishturk and Turbor. Just after Sky Road begins it divides, the lower roadway takes you right along the water and is quite nice, the upper roadway takes you high above sea level to view the stunning rugged beauty that is the Connemara region. It's not to be missed. We lost count of how many times my father drove Sky Road!

We took a ferry to Inishturk one day. It's also called "Wild Boar" Island and is loca 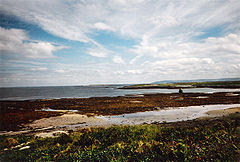 ted of the coast of County Mayo! 70 or so people live there in 2 main settlements with a social club in between. The more populated island of Inishbofin ("White Cow") is located 5 miles off the coast off Connemara and has a population of 200. It used to be accessible only by ferry but it now has an airstrip and helipads and there are 3 hotels on the island. Fishing and music are major activities here. There are several beautiful white sand beaches here and, again, magnificent scenery.
I have wonderful memories from this trip. My sister and I discovered tea which I love to this day! In Ireland in even the most basic of pubs, tea was served to you in a pot on a tray with a plate of biscuits, so elegant and sweet. The people we met during the trip were so friendly and interesting and kind even the drunken sailors in Dingle! I'm sure there are things I've forgotten to tell you. I might be updating this post soon! Otherwise, in a week or so I will post about my second trip to Ireland when several college friends and I went to watch out football team play in Ireland! Ooooo boy was that a fun trip!
By the way, I have stacks of pictures from the trip but none are able to be uploaded so I just took pictures from the internet to illustrate my post.
Amy
Posted by Unknown at 7:16 AM