I grew up on the North Shore of Long Island in New York. I lived 25 miles from New York City in a beautiful town along the Long Island Sound . I was a 2-minute drive from the beach and a 20-minute drive from the ocean, across the Island on the south shore. My house was a beautiful 3-bedroom house with a very pretty back yard not quite an acre in size. All along the north shore from Great Neck out to Huntington and on into Suffolk County (I lived in Nassau County) mansions dotted the coast line. Gorgeous, old mansions with splendid estates reached by long drives up to the home and beautiful gates kept closed at the beginning of that drive to keep out the gawkers and nosey-pokers (me!)
I read F. Scott Fitzgerald's The Great Gatsby when I was a teenager (and several times since!). I loved thinking about the north shore during the early part of the 20th century when the estates and mansions were the primary residences dotting the coast and there wasn't much else to see but nature, and a few farms. During the "roaring '20s" and some years prior, the North Shore of Long Island, dubbed the "Gold Coast", was considered glamorous and brilliant people by "millionaires", oil men, financiers, who owned yachts and race horses and were always seen in the company of beautiful, lavishly dressed women.
So when This Stop Willoughby crafted this lovely challenge:
{This sounds like a challenge! Here are the rules: You will stay in the time and place you choose for 24 hours, and you can interact with anyone, but you may not alter history in any way (meaning you can't prevent a death, stop an event from happening or introduce items/ideas not available in that time). Creativity is highly encouraged! If you accept this challenge but don't want to post it to your own blog, feel free to share your time travel story in my comment section. }
w
I had a very good idea of where I wanted to go!
I would like to be transported back to a Saturday in June 1925, it's about 2p.m. I am in Schrafft's, a popular Manhattan restaurant. Many young women gathered here for lunch or tea on Saturdays. I listen as they quietly gossip about the wealthy families with the beautiful homes along the "Gold Coast" and the affairs, fighting and scandals among family members that they read about in the society pages. Talk eventually turned to the night ahead. What were the plans? Sometimes it would be toasting the night at El Morocco or dancing at the Hotel Pennsylvania but the best night was always when one or another of the group had an invitation for her and several friends to a Ball being held at one of the Gold Coast mansions!
Since I'm "visiting" I get the chance to follow them and drop in on all the activities!
There is conversation everywhere about all sorts of issues. It's an exciting time in the country. The economy is bouncing-back from a recession as a result of President Harding's "return to normalcy" plan and economic stimulus policies following World War I which led to the economic boom during Calvin Coolidge's presidency. Both Harding and Coolidge reduced taxes for the rich and encouraged spending. President Coolidge also blocked government intrusion into private business (laissez-faire) and the Federal Reserve expanded credit. Americans felt like there was money to spend and they spent it. Many would over-extend themselves taking advantage of the credit and soaring stock-market which would lead to big problems later on but for now it was a celebratory time.
During World War I women were needed in the work force. This aided in the movement for women's suffrage and in August 1920 the Nineteenth Amendment was passed. the idea that woman could have a career and a family began to take hold. A greater variety of jobs were available to women and laws were being passed improving work conditions. Women began attending colleges and state universities. Progress can take time though. Most of the classes women took were home economics, "Husband and Wife", "Motherhood" (they offered such classes!). Many women attended college with the idea of finding a suitable husband.

Radios were the first mass broadcasting medium. Radios were inexpensive and extremely popular. Coolidge made us of them in his presidency and radio programs became as varied and numerous as TV programming today. Radios had a significant role in popularizing Jazz music. Jazz was becoming powerful symbol of NY's cultural scene and, considered sophisticated, decadent and modern, it was a popular mode of expression in the day. Coleman Hawkins, Duke Ellington, "Jelly Roll" Morton, Louis Armstrong and Bessie Smith came to NY during the '20's. But the majority of people listened to what we would call "sweet music"
The first film in color rather than black & white came out in 1922, Toll of the Sea and in 1926 sound effects and music were introduced with Disney's Don Juan. The Jazz Singer introduced dialogue into movies in 1927.
Ballrooms sponsored dance contests where dancers invented different movements, honed their skills and competed with tap dancing became popular. Electric lighting made socializing in the evening easier and more comfortable. Dance Halls and and live music became popular and people danced the waltz and tango, Lindy Hop, Foxtrot and the Charleston.
The 1920's was a period that saw the emergence of many notable authors. D.H. Lawrence's Lady Chatterly's Lover was published to great a scandal! F. Scott Fitzgerald wrote The Great Gatsby and This Side of Paradise about youth and morality after WWI. Sinclair Lewis wrote Main Street his satire about small town life versus the big city which became one of the most popular novels of its time. He followed this with Babbitt satirizing American commercial culture. Edith Wharton wrote The Age of Innocence about upper-class NYC in the 1870s winning the 1921 Pulitzer Prize (although originally the prize was meant for Main Street but the Board of Trustees rejected it!). This is just a smattering of the amazing, wonderful books published in the 1920s.
Transportation was by water, railroad or car. Cars were a luxury before the war but began to be mass produced shortly after. The North Shore Division was a newly electrified aspect of the Long Island Railroad with improved service. It was quite common towards the weekend to see crowds of well-dressed young people disembark from the train at various stations along the north shore and await transportation by auto to the various estates. Some of the prettiest, most stylish of the young women hoped to be met by the handsome, dashing young sons of the financiers and oil barons who headed the "Gold Coast" estates. Sure enough, peeling down the street in a Model T, goggles askew, scarf trailing in the wind wearing a linen duster, was a young man looking for his friends and their dates!
I'm going to stop in at as many of the homes as I can and watch as they continue their conversations or, more likely, dance the night away at: 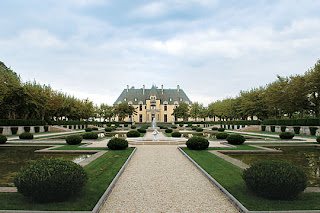 Oheka Castle, the french chateau home of the financier Otto Kahn in Cold Spring Harbor with views of the water, tennis courts, an indoor swimming pool, the largest private greenhouse complex, a landing strip and an 18-hole golf course with many orchards on 443 acres. The mansion had 126 rooms with a ball room large enough for 200 people to dine and dance attended by 200 servants.

Considered somewhat the inspiration for The Great Gatsby, today, Oheka Castle is a very popular locale for weddings

The Sand's Point home of Daniel Guggenheim resembles an Irish Castle. It was originally built by Jay Gould for his wife Viola Catherine Clemmons, an actress, who wanted a replica of Kilkenny Castle in Ireland. Jay Gould sent an architect to Ireland to study the castle, he returned and attempted to build a replica but wasn't able to. Viola Clemmons didn't want the house and so it became the home of one of the Guggenheim's. Daniel Guggenheim built an English Castle for his mansion and the Irish Castle became the stables.
It's now called Hempstead House and is part of the Sands Point Preserve. 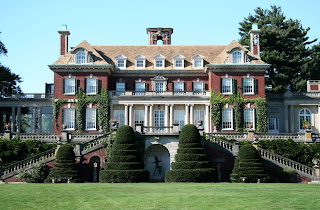 John Phipps, the heir to a U.S. Steel fortune, built a 700 room mansion on over 100 acres. The house was built in the style of an English Manor House and many of the furnishings and artwork remain today. The gardens were inspired by Phipps English wife, Margarita Grace and resemble a formal English garden. They include a pond, numerous rose bushes and a walled garden. This is Westbury Gardens today, the best preserved Gold Coast mansion and estate.


"Laurelton Hall" was built over-looking Cold Spring Harbor in Laurel Hollow. Built by Louis Comfort Tiffany, the VP and Director of Tiffany and Company and an artist and designer, it's an 82 room, 25 bath mansion on 600 acres. The house itself was a work of art and within its walls were many of Tiffany's notable works. The estate soon served as a school for artists run by Tiffany and his foundation. A chapel was built on the ground with Tiffany windows and a separate gallery.
The Pratt family lived on several estates throughout Glen Cove. The Manor was a brick Georgian Mansion on a 55-acre estate belonging to John and Ruth Pratt. He was an attorney and an executive with Standard Oil and Ruth Baker Pratt was the first Rebuplican Congresswoman from New York and representing the "silk stocking" district.
Today it is Harrison House Hotel and Conference Center.
Welwyn in Glen Cove was the family home and 204 acre estate of Harold Pratt. This home ended at the beach from which Harold had all of the stones removed, and much of the ground contained plant life and trees of significant botanical interest since he and his wife, Harriett Barnes, was a horticulturalist. In order to take advantage of the breath-taking water views, Harold Pratt built a "Temple of Love' on the highest point of the estate.
Today Welwyn is the The Holocaust Memorial and Education Center of Nassau County and the estate grounds are a nature preserve open to the public which contain beautiful, straight Tulip Trees.

It's time for me to return to my normal life. I hope you enjoyed the trip to the roaring '20s and the "Gold Coast"! These are just a few of the many mansions and estates that were part of the Gold Coast. I really enjoyed researching this and want to do much more research so periodically an estate may show up in these pages!
Amy
(I relied mostly on Wikpedia and The Long Island Sound: a history of its people, places, and environment By Marilyn E. Weigold on Google books)
Posted by Unknown at 10:25 AM