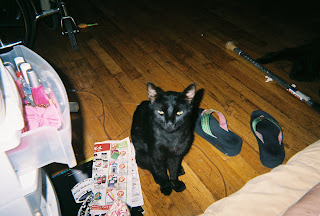 In our family we don't have human kids we have feline kids. Several of them are pictured around this blog. I have been a bad mom and quite remiss because I forgot to blog about or add the picture of our "black sheep" here. So let me introduce you to "Caesar Augustus", always and affectionately known as Dopey.

My husband found Dopey or Dopey found him about two years ago. He was scraggily, hungry, his fur was patchy at best. My husband started feeding Dopey (after hubby realized that Dopey would leave the food he was eating to follow him -why? - and had to be re-introduced to the same bowl, which still happens to this day, he got his nickname) and soon he soon became a permament member of the family. His fur became thick, soft and shiny, the bald patches grew in, he gained weight and filled out and today Dopey is the picture of health. And don't worry, he never goes hungry because when he feels any pangs in his tummy he meows and yaps and whines until somebody feeds him, usually my husband. Dopey's meows aren't melodical or full of harmony, he gets fed quickly, often in hopes he'll stay quiet!

Dopey's one of those kids of whom you might say, endearingly, of course, "he's a cat only a mother could love"! Dopey's not really cuddly or sweet (but he does have his mushy moments and has a very healthy purr), he's not prone to cute gestures or funny sleeping positions and he's definitely spastic when playing with his toys. But we love him because he's Dopey and there's just something lovable about him. When we moved last year, Dopey wasn't around the day of the move. We went back a handful of times until we found him sitting in the driveway waiting for us as if we still lived at that address! We couldn't leave him behind.

Yesterday we learned, again, how much Dopey means to us.

Our neighbors have a Jack Russell Terrier who gets walked on a leash. This dog really likes cats, not as a friends, but more like treats, and given the chance will attack them. Yesterday he was given the chance when his owner turned away for a minute and the leash was slack. Poor Dopey was in his sights and was attacked. We learned, too, that Dopey can take care of himself and gives better than he gets. The poor dog's face was pretty bloodied when the fight was over but the way Dopey reacted, the dog is lucky he ended up with just a few scratches. The attack only lasted a few minutes but what a harrowing few minutes! The screeching sounds were inhuman (pun intended!) As soon as he could get away Dopey ran - fast. He didn't return for several hours. Hubbie searched high and low for him several times but, like most cats, Dopey didn't want to be found. So, he couldn't be found. We sweated out the hours waiting for him to return, hoping he wasn't injured or bleeding.

Dinner-time came and suddenly there was Dopey whining loudly for some food!
My husband has been bragging about his "champ", that from now on he's Ceaser and no longer Dopey. He's a "tough guy" and his new hero! Boys! What are you gonna do?! 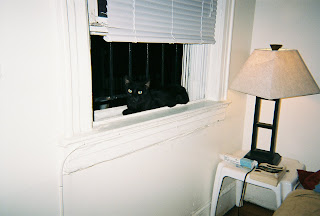