A Tail of Unexpected Love!! 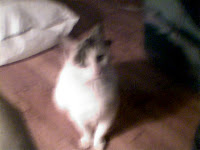 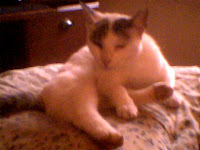 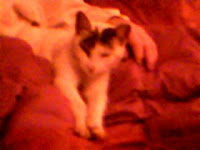 A few posts ago you met Dopey. There aren't many photos of him since he doesn't really like being photographed but Hennessey is helping us bring him around!
Hennessey is a little more than two-years old. She appeared in our driveway one day, just a little ball of white fluff. She was with her brother, Huxley (our other white cat, big white cat!) She was small, very timid and hungry. Everyday, Hennessey and Huxley came to our home to eat but then they left. They seemed too small to live on the streets but they weren't ready to cohabitate with humans. So we kept an eye on them, particularly my husband and we fed them everyday. Within 3 or 4 months, Huxley came inside but it took Hennessey a couple more months.
Hennessey still didn't trust us but she was coming inside for a warm place to rest and to get some food. We discovered that she loved to play. She ran up and down the hallways chasing balls and loved to try to catch the red dot of the laser pointer!
Hennessey is not a mushy, affectionate cat. She likes to be petted occasionally on her head and have her cheeks scratched, but that's about it. And believe it or not, too much affection, even the kind she likes, actually makes her angry! lol
When we moved to our new home (she did not like being put in a cat carrier and my poor husband didn't like putting her in one. After nearly an hour long chase and enough scratches that made his arms look like a road map, Hennessy was successfully crated and hubby survived!) the cats spent more time around each other than usual while they were acclimating to the new place, exploring the different smells and always making sure we weren't too far away. Our sedentary, mellow Dopey decided to play macho kitty and, at different times of the day, he would chase and attack another cat, depending on who was in his sights at the time. When it happened to be Hennessey, she wasn't having any of it and she gives as good as she gets so Dopey backed off her pretty quickly!
But soon after that, poor Hennessey went into heat (she wasn't fixed yet, obviously!) Suddenly we were overrun with tomcats from all over the neighborhood. (That's how Yorick came into our lives - but he's a different & bittersweet story for another day.) They were jumping in through the window and finding their way in downstairs, a different cat in the basement rafters every night, and the sounds of poor Hennessey yowling through the night left us groggy, grouchy and anxious to bring her in asap to the "Vee Eee Tee" (never let them hear the actual word!) To our shock, Dopey wouldn't leave her alone despite the other cats. He followed her around for a week. We thought he was too old to care or bother with this kind of thing, but he's been surprising us a lot since we've known him, and men never really tire of "it" anyway, do they?! Periodically he would get on top of her and have his way. Or try to. But we quickly realized Dopey wasn't really sure how to finish what he started. He'd use his teeth to grab Hennessey's fur near her neck, and then stand there. Hennessey wasn't impressed with the idea to begin with but when Dopey couldn't figure out what to do she got mad. She would twist and turn, there was some loud meowing/yelling that built to a giant, pathetic yelp, then a leaping and suddenly standing alone, Dopey, looking confused as Hennessey went about eating or cleaning her fur as if nothing had happened! Dopey still occasionally trys his moves on Hennessey and the whole scenario is repeated!
We thought Hennessey would stear clear of Dopey after his aggressive male behavior. Boy were we wrong! And just like a woman who suddenly wants what she can't have, as soon as she realized Dopey wasn't "interested", she started flirting with him! She would run or sidle up to him, nip at him or meow (fyi: Hennessey has the worst sounding meow, it's like the last gasps of a giant rat - a slicing, nasal plea!) and then run away, turning around to make sure he was following her. I couldn't believe my eyes when I first saw her do this. But hubbie had seen her doing it too, more than once! Dopey fell for it, hook, line and sinker, of course! Before long they were following each other home at dinner time, nuzzling each other, making wierd sounds at each other and sleeping together. This has been going on for many months now. Sometimes they will come home at different times but they look for each other, Hennessey especially. When she sees him, she'll run up to him and lightly head-butt him and mew at him. Dopey will nuzzle her and lick her head and face and after they both eat they leave together. The other night Dopey wasn't home, we hadn't seen him all day. Hennessey kept looking around for him and when she couldn't find him she went outside and sat in front of the apartment waiting for him. When he still didn't show up, she left. Ten minutes later in came Hennessey followed by Dopey!
Now they behave like an old married couple. They have a quick conversation when they see each other, Dopey will back off food if she's interested and wait for her to finish, and they more than occassionally get on each other's nerves, yell a little, stalk off to their corners and then it's just as quickly and off they go together. It must be love!