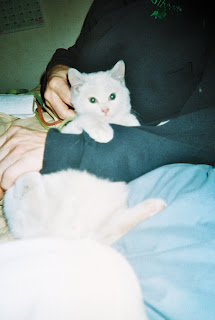 True happiness comes from a sense of peace and contentment,which in turn must be achieved through the cultivation of altruism, of love and compassion, and elimination of ignorance, selfishness, and greed. ~Dalai Lama

This is a picture of a kitten named Cassy who lived with us for a short time until we found her a loving home. She is a beautiful cat with soft, fluffy fur and a crazy personality. She loved to play and had the energy of ten cats! But when she got tired she would suddenly pass out wherever she was, her little head would nod a few times and then "wumpf"! hit the bed and she was out.

We like to spend Saturday morning working on the Sunday NY Times crossword, watching taped episodes of First 48 or a movie from Netflix and spending time with the kitties, if life permits! Today, so far, I learned that Scotland is known as "The land of cakes" because of the Scots love of oatcakes, money in Iceland is called "krona" and my cat, Daisy, likes a little pancakes with syrup for breakfast!

I really appreciate the kind comments regarding my last blog about the disability I have. I was a little hesitant to say much at first. The physical maifestation of the disease results in numerous stares when I go out and, although I am used to it after all thesae years, it doesn't mean I like it. When I started blogging, I didn't initially realize there was nothing about it in my profile, it's not the first thing that comes to mind when I think of my life despite that fact that I had to stop working because of my disability. That doesn't sound like it makes sense but it does. In my life, most days, being disabled is just part of me so it doesn't stand out for me. But after I thought about it for a while, it felt a little disingenuous not to talk about it. I'm not embarassed about it and I know it's shaped the person I am. I also know some people will like me less because of it, some will like me more but most people it won't matter too. Thank you!

Jane gave me some wonderful book recommendations! Thank you! I love recommendations! Has anybody heard of, or better yet, read A Dance to the Music of Time by Anthony Powell, a novel sequence of twelve-volumes. Yep, 12! I never heard about it until hubbie read about the books in God is not Great by Christopher Hitchens. The books sound interesting but 12 seems like a lot. If anybody has read some or all of them or knows anything about them, I'd love ot know!

I have some reviews to write and Saturday things to do! I hope you have a lovely Saturday!