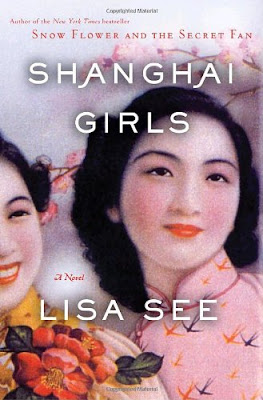 Summary: In 1937, Shanghai is the Paris of Asia, full of great wealth and glamour, home to millionaires and beggars, gangsters and gamblers, patriots and revolutionaries, artists and warlords. Twenty-one-year-old Pearl Chin and her younger sister May are having the time of their lives, thanks to the financial security and material comforts provided by their father’s prosperous rickshaw business. Though both wave off authority and traditions, they couldn’t be more different. Pearl is a Dragon sign, strong and stubborn, while May is a true Sheep, adorable and placid. Both are beautiful, modern, and living the carefree life ... until the day their father tells them that he has gambled away their wealth, and that in order to repay his debts he must sell the girls as wives to suitors who have traveled from Los Angeles to find Chinese brides.

As Japanese bombs fall on their beloved city, Pearl and May set out on the journey of a lifetime, one that will take them through the villages of south China, in and out of the clutch of brutal soldiers, and across the Pacific to the foreign shores of America. In Los Angeles, they begin a fresh chapter, trying to find love with their stranger husbands, brushing against the seduction of Hollywood, and striving to embrace American life, even as they fight against discrimination, brave Communist witch hunts, and find themselves hemmed in by Chinatown’s old ways and rules.

At its heart, Shanghai Girls is a story of sisters: Pearl and May are inseparable best friends, who share hopes, dreams, and a deep connection. But like sisters everywhere, they also harbor petty jealousies and rivalries. They love each other but they also know exactly where to drive the knife to hurt the other the most. Along the way there are terrible sacrifices, impossible choices and one devastating, life-changing secret, but through it all the heroines of this astounding new novel by Lisa See hold fast to who they are – Shanghai girls.

My Thoughts: Shanghai Girls is the story of sisters Pearl and May, born into wealth and promise, totally spoiled and expecting to be given whatever they want. They are completely ignorant of the changing political climate and their father's financial ruin until suddenly, one day, their lives change drastically. They are forced to flee Shanghai for America and must learn to adapt in order to survive. They have only each other to rely on when they land in California.

Although they are family, each sister is an individual with her own desires, feelings and ideas. As such, each sees life from different perspectives. And if they don't learn to communicate, to understand each other and reveal the secrets that twist them up inside, love and loyalty may crumble at the feet of petty jealousies, anger and resentment.

Lisa See's writing is vivid, strong and unforgiving. The older sister, Pearl, ("jie jie" in Chinese) is the narrator. Through her, the reader has the opportunity to experience things as if living beside her We feel Pearl's pain, understand her confusion and know when she feels unsafe. Pearl is shocked by the conditions in LA's Chinatown which are nothing like the opulence she knew in Shanghai, but she clings to the apartment she and May live in despite her initial repulsion. She resents her younger sister, May, ("moy moy" in Chinese) going out everyday and adapting to the employment, resources and people of Chinatown. In short, May is building a life for herself little by little in the film industry. She doesn't understand her sister's behavior and seems to care little what's happening in Pearl's life. She gives little credence to a terrible trauma Pearl suffered before they left China. During this time in history, nobody knew of, let alone understood PTSD, (they certainly didn't in culturally sheltered Chinatown), which is probably what's ailing Pearl.

As the years pass, we share Pearl's struggles, victories, sorrows and happiness. She pines for China and mourns the loss of the Shanghai she once knew, comparing everything: experiences, places, people, etc, to the Shanghai of her childhood. She becomes political, joining protests regarding what she understands to be going on in China, though she isn't always perfectly informed. In short, she wants to be a part of America but she doesn't want to let go of Chinese traditions. May is living a nearly polar opposite life, always in the present. For her, it is as if the past never existed and the future too uncertain to care about. She seems more content. The sisters love each other and will always be loyal simply because they are sisters, but they grow distant over the years, each refusing to understand the other, listen to each other's needs, concerns, and what makes them happy.

I found this amazing book very difficult to read in spots. There is death: dead bodies, dead babies and rape, making several of the more graphic scenes hard to stomach. It isn't a happy book and, at times, the sadness and hopelessness dragged me down. Pearl is troubled, worried or sad much of the time, but often for good reason. It's hard to imagine experiencing what she has and be able to still stand tall. The few times she is happy looms large and you can feel the lightness in her spirit but the tension and stress quickly return .

Shanghai Girls covers 1937-1957 in the USA and China, including the Japanese bombing of Shanghai and Pearl Harbor Mao Tse-tung's Red China. The USA's treatment of Chinese immigrants during this period was often times cruel causing me to cringe as I read what Pearl, and others experienced. But Pearl is her mother's daughter. She may have been raised in riches but she is strong and resourceful. The wisdom passed on and lessons learned from her mother while growing up make sense to her now, though at the time she mocked them with a spoiled child's insolence. Pearl draws on her memories to help her get through the days and make a life for her family in America while never forgetting her Chinese roots.

Pearl is a remarkable woman who endures much pain and hardship for May and the family she loves. She and May approach life very differently but both women share at least one common goal: survival. Author Lisa See has told their story, the story of countless Chinese women over those terrible years of political unrest, with love, respect and a fierce honesty. It was a privilege to read Shanghai Girls and it's a story I will carry with me for a very long time.
Posted by Unknown at 12:55 PM