Book Review: What Was Lost by Catherine O'Flynn 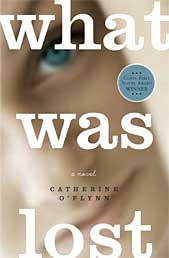 Publisher: A tender and sharply observant debut novel about a missing young girl—winner of the Costa First Novel Award and long-listed for the Booker Prize, the Orange Prize, and The Guardian First Book Award.
In the 1980s, Kate Meaney—“Top Secret” notebook and toy monkey in tow—is hard at work as a junior detective. Busy trailing “suspects” and carefully observing everything around her at the newly opened Green Oaks shopping mall, she forms an unlikely friendship with Adrian, the son of a local shopkeeper. But when this curious, independent-spirited young girl disappears, Adrian falls under suspicion and is hounded out of his home by the press.
Then, in 2003, Adrian’s sister Lisa—stuck in a dead-end relationship—is working as a manager at Your Music, a discount record store. Every day she tears her hair out at the outrageous behavior of her customers and colleagues. But along with a security guard, Kurt, she becomes entranced by the little girl glimpsed on the mall’s surveillance cameras. As their after-hours friendship intensifies, Lisa and Kurt investigate how these sightings might be connected to the unsettling history of Green Oaks itself. Written with warmth and wit, What Was Lost is a haunting debut from an incredible new talent.


My Thoughts: I think What Was Lost is a fantastic book because it is unique, creative, humorous and filled with interesting, quirky characters, such as Kate Meaney. To my complete surprise, she's become one of my literary favorites. Unfortunately for the readers, Kate is only in the first quarter of What Was Lost but she is felt throughout the entire book. She's the star of this debut novel by Catherine O'Flynn. Though just 10-years old, she is more intelligent, self-disciplined and focused than most people three times her age. She spends most of her time alone because, being a "detective", she believes it is a discipline that's a solitary activity. She doesn't fit in with children her age. She considers them boring. Yet, she doesn't appear to be a loner or weird, someone without friends. Not only is she thoughtful and well-mannered, she's interesting. Kate impresses people with her intelligence and single-minded commitment to her "job" to detect crime and criminals. Her ability to "roll with the punches" and never lose sight of her goal despite a life-stopping tragedy is remarkable. Kate also serves as a sharp contrast to other characters in the book who are lost and struggling to figure life out.. Catherine O'Flynn has written a multi-layered mystery/investigation novel, but more than this, it's a story about people who are lost and floundering. All the major characters are trying to cope with the loss of a loved one that's deeply impacted them, leaving them struggling to figure things out. Young and ambitious Kate Meaney touched each of these characters at some point in their lives before she disappeared, leaving a lasting impression that inspires them many years later.

Several of the other characters, Lisa and Kurt for example, are lost and struggling to make sense of their lives twenty-years after Kate disappears. Memories and reminders of Kate infiltrate their thoughts, helping them to view life in a different way and to consider taking risks they've been afraid to try before now. These characters suddenly feel a renewed purpose in their lives.

Teresa, another of the main characters, was Kate's classmate and they became unexpected friends. Kate recognized that Teresa was struggling and lost and managed to save her. Teresa has been trying ever since to thank Kate for pulling her out of a bad situation and giving her a chance to excel. Now the Detective Chief Inspector, Teresa has been trying to find and rescue Kate for years.

The Green Oaks Shopping Center in Birmingham, the setting for much of the story, can be considered a character in its own right. It represents the hopes, dreams and failures of the people who walk through its doors daily and is the site of much of Kate's detective work. Twenty-years later, Kurt and Lisa work at Green Oaks in dead-end jobs they detest. The author's description of Lisa and Kurt's jobs and the various scenes about their daily lives at work are funny but at the same time, sad and depressing. If they can break free of Green Oaks maybe they will be able to quell the despair and restlessness they feel about their lives.

I've only skimmed the surface of what this book is about because there is too much to detail in a limited book review. Suffice to say this is an amazing debut by O'Flynn, and, if you're looking for an engrossing read with multiple story lines, fascinating characters, written with wit, charm and intelligence, I can't recommend this book strongly enough.

What Was Lost is my own copy purchased after I read Jenners review at Find You Next Book Here! Rundpinne also recently reviewed this book.
Posted by Unknown at 12:32 PM