Before I Go to Sleep by S. J. Watson 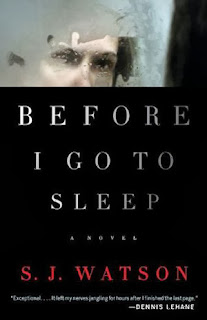 Before I Go To Sleep by S. J. Watson

Book Summary:  Every day Christine wakes up not knowing where she is. Her memories disappear every time she falls asleep. Her husband, Ben, is a stranger to her, and he’s obligated to explain their life together on a daily basis—all the result of a mysterious accident that made Christine an amnesic. With the encouragement of her doctor, Christine starts a journal to help jog her memory every day. One morning, she opens it and sees that she’s written three unexpected and terrifying words: “Don’t trust Ben.” Suddenly everything her husband has told her falls under suspicion. What kind of accident caused her condition? Who can she trust? Why is Ben lying to her? And, for the reader: Can Christine’s story be trusted?


My Thoughts:   This book grabbed hold of my attention from the very beginning and kept me glued to the pages all the way through.   The story is told in the first-person voice of the main character, Christine.  This is an extremely effective way to tell the story because it means the reader shares Christine’s experiences with her as she has them.  Since she suffers from an especially brutal form of amnesia, you can begin to imagine how shocking and surprising this reading experience is at times.  Every morning when she wakes up, Christine has no memory of the day, week, month or year before.  She has no idea who she is, who is the man in bed next to her, where she is or where she lives or even how old she is.   We feel some of the same fear and pain as Christine does while she desperately tries  to figure out who she is.  Her husband, Ben, wakes and, as he tells her, again, who she is, who he is, where they live and more, she has no recourse but to believe him.  Christine is completely dependent on Ben for everything, a rather unsettling feeling especially since she doesn’t feel like she knows him. Ben is, essentially, a stranger to her.


It’s easy to sympathize with Christine.  She seems so alone and so innocent, such a victim.  As the story continues, Christine begins to experience flashes of memories.  She’s not sure she can trust what she sees and feels, but these memory flashes are too tempting to ignore.  They’re also frightening because some of them reveal that the people she trusts may be lying to her. The memory flashes also reveal things about her that horrify Christine.  She may not be just an innocent, sweet, victim after all.  The pace of the story increases as it becomes clear something sinister is happening here.  S. J. Watson has a knack for plot twists and turns that confuse not only Christine but his readers, as well.  A couple of times I was sure I knew what was happening only to discover I was completely off-track. This made for an exciting read!


The premise of Before I Go to Sleep is fascinating.  It reminds me of the movie, Memento in which a man suffers amnesia after an attack in which his wife is murdered.  He uses a different system than Christine to compensate for the memories he can no longer retain.  But, like Christine, he constantly questions what people say to him, always unsure of whether he can trust what they tell him.  It’s frightening to contemplate living without being able to remember what you did, who you spoke to or where you were the day before or earlier in the week.  Although there are ways to compensate for memory loss, they’re poor substitutes, at best, for the real thing.  And to think, then, that people in your life will use your infirmity to manipulate you, it causes goose pimples up my arms and a chill down my spine.  But, as Watson proved here, these elements can be brought together in a wonderfully taught, suspenseful novel that’s nearly impossible to put down once you start reading it.


This book received rave reviews when it first appeared.  I waited to read it because everywhere I looked in the book blogging community, I found it.  I’m always concerned that I’ll expect more from a book so highly spoken of and, as a result, might be disappointed with the book when, in reality, it really is quite good.  I’m glad I waited to read this book because it’s a fantastic, exciting, totally suspenseful book that I was absorbed into the moment I started reading it.  If you haven’t read Before I Go to Sleep, I highly recommend it!
Posted by Unknown at 12:10 PM