First Chapter First Paragraph Tuesday Intros is a weekly meme hosted by Diane at Bibliophile by the Sea every Tuesday. To participate share the opening paragraph or two of a book you've decided to read based on that paragraph.
I won this book shortly after it was published and have meant to read it ever since. Like so many of my books, it got lost on my shelves for a while but I recently unearthed it while on an organizing kick. I've just started reading it and already I'm hooked! The story is set in a private academy in MA and centers on a 14-year old girl who wants to be a journalist like the deceased Edward R. Murrow she idolizes and converses with daily! Sounds fascinating, right?!

Be sure to drop by Bibliophile By the Sea to read Diane's selection this week and see who else is participating! You'll surely get some good book titles! 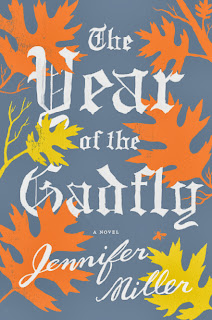 The Year of the Gadfly by Jennifer Miller
Piezophiles
These pressure-loving microbes live in the ocean depths under extreme hydrostatic pressure. They exist not in spite of the oceans crushing weight, but because of it. Without this pressure to fight against, they would perish.
~Marvelous Species: Investigating Earth's Mysterious Biology

THE DAYS WERE already growing shorter, prodding us toward summers end, when my mother and I left Boston for the sequestered town of Nye. She hummed to the radio and I sat strapped into the passenger seat, like a convict being shuttled between prisons. In the last six months my Beacon Hill neighborhood had shrunk to the size of a single room: Dr. Patrick's office, with its greasy magazines and hieroglyphic water stains. The vast landscape that opened before us now wasn't any more comforting. The mountainous peaks resembled teeth. The road stretched between them like a black tongue. And here we were, in our small vehicle, speeding toward that awful mouth.

From the maps and photographs I had uncovered at the Boston Public Library, I knew that Nye would be a nest of gloomy woods sunk into one of these mountains. The mountain had no name, which troubled me. Even the word “Nye” sounded like a negation, an absence, a place conflicted about its own existence.

My mother (Ivy League MRS recipient and full-time philanthropy board member) was unimpressed by this detail. In fact, she was chipper as a Today Show host. “Isn't it exciting, Iris! Starting high school on a new foot?”

“You want to replace my biological foot with a prosthetic one?”

“Don't give me that cliché nonsense.”

You mean anti-cliché nonsense, I thought, and switched the station to NPR. I tried to let the familiar voices soothe me, but every mile brought us closer to the hunching mountains, those hills overlapping like the folds of a thick curtain, hiding Nye from sight.

The official reason for my family's move was professional. My father (savvy businessman, befuddled parent) was opening a second Berkshires resort for tourists who liked to experience nature while they had their leg hair singed off with lasers and their eyelashes dyed. The unofficial reason we were leaving Boston, however, was Dr. Patrick. I'd started seeing him six months before, after my mother found me arguing emphatically with the wall. Well, all she saw was the wall, but I was having a conference with my spiritual mentor, Edward R. Murrow. (And, yes, I knew he'd been dead for forty-seven years, but why should a person limit her interlocutors to the living?) And because there was no “What to Do When Your Daughter Talks to Dead Journalists” chapter in the myriad self-help books my mom had been reading, she shipped me straight off to the good doctor.

What do you think? Would you continue reading?
Posted by Unknown at 10:51 AM