First Chapter First Paragraph Tuesday Intros is a weekly meme hosted by Diane at Bibliophile by the Sea every Tuesday. To participate share the opening paragraph or two of a book you've decided to read based on that paragraph. I plan to read this book soon.  I received it a few days ago just as I started reading the author's first book, "Heart Shaped Box".  Both are thrillers (not that you can tell from this opening) so I know there are readers who won't be interested but for those who are, the premise to this book is fantastic!  I cannot wait to read it. 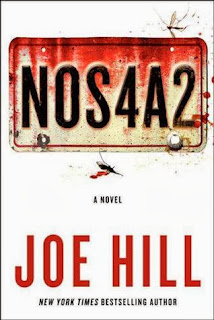 Nurse Thornton dropped into the long-term-care-ward a little before eight with a hot bag of blood for Charlie Manx.

She was coasting on autopilot, her thoughts not on her work.  She had finally made up her mind to buy her son, Josiah, the Nintendo DS he wanted, and was calculating whether she could get to Toys “R” Us after her shift, before they closed.

She had been resisting the impulse for a few weeks, on philosophical grounds. She didn’t really care if all his friends had one.  She just didn’t like the idea of those hand held video-game systems that the kids carried with them everywhere.  Ellen Thornton resented the way little boys disappeared into the glowing screen, ditching the real world for some province of the imagination where fun replaced thought and inventing creative new kills was an art form.  She had fantasized having a child who would love books and play Scrabble and want to go on snowshoeing expeditions with her.  What a laugh.


Ellen had held out as long as she could and then, yesterday afternoon, she had come across Josiah sitting on his bed pretending an old wallet was a Nintendo DS.  He had cut out a picture of Donkey Kong and slipped it into the clear plastic sleeve for displaying photographs.  He pressed imaginary buttons and made explosion sounds, and her heart had hurt a little, watching him make believe he already had something he was certain he would get on the Big Day.  Ellen could have her theories about what was healthy for boys and what wasn’t.  That didn’t mean Santa had to share them.

What do you think? Would you keep reading?