The Odds: A Love Story by Stewart O'Nan 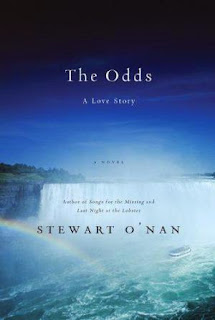 
Book Summary:  Jobless, nearly homeless, and with their marriage on the brink of collapse, Art and Marion Fowler flee their Cleveland home for one last Valentine's Day hurrah at Niagara Falls. Their days are spent sightseeing, but at night they risk what dwindling resources they have left at the roulette wheel to fix their finances.


A tender yet honest exploration of faith, forgiveness and last chances. The Odds is a reminder that love and life are always a gamble.


My Thoughts:  The Odds is a small book that delivers a rich and powerful story, one to which many of its readers can relate.  Stewart O’Nan wrote this book at a time when the economy was failing and destroying the lives of people across America.  In just a few short years, Art and Marion Fowler’s lives have been turned upside down.  Art believes he has the answer to theirs, if not his, prayers.  He thinks he and Marion can rekindle their romance at Niagara Falls, the scene of their honeymoon, and, quite possibly, win enough money at the casino to pay their mortgage and get them back on track.  Art’s so excited at times, he’s almost giddy.  Marion agrees to go along with Art’s plan though she thinks it’s a pipe dream.  For Marion, the Niagara weekend is a last hurrah: a celebration, of sorts, of their years together, as well as a chance for her to clear the slate and start over, alone.


Two specific elements make The Odds shine and so worth reading: O’Nan’s character development and his astounding observations of human nature and behavior.   Art and Marion could be our next-door neighbors, our aunt and uncle, possibly even ourselves.  They’re so recognizable and such real people it’s easy to sympathize with them one minute and feel frustrated by them the next.  Marion and Art have very different ideas about where their lives are going now.  O’Nan understands how both men and women feel after being together 20 years, raising two children and navigating the highs and lows of life together.


O’Nan‘s awareness of the depth of a woman’s emotions comes across in his deft portrayal of Marion as a woman who cannot deal with the past.  There’s too much pain, angst and disappointment from her years with Art.  She cannot imagine letting go of that time and staying together as if the hurt never happened.  When Marion looks at Art, more often than not she is irritated by his behavior and unable to forgive him for the affair he had.  O’Nan also clearly understands how much easier it is for men to let go of the past, even to ignore it as if it no longer matters.  Like Art, men think they can fix mistakes and smooth over the bitterness and disillusionments. Art believes he can persuade Marion to love him like she did early in their marriage by coaxing her with the Valentine’s Day weekend at Niagara Falls and a pretty new engagement ring.  Art doesn’t how much she’s been hurt and how Marion feels about their marriage.
O’Nan gives us a prelude to every chapter in the form of a statement of the odds of some event or other happening.  This fun and fascinating literary vehicle heading each chapter foreshadows an aspect of Art and Marion’s life we will learn about through them.  I began to wonder if Art and Marion’s story would follow the statistics and become a cliché or if they would be able to persevere and beat the odds.  I was completely invested in Art and Marion’s story and curious to know where they ended up.


Art and Marion’s life together was revealed to us through each of their thoughts and feelings which revealed bits and pieces of their past.  These ‘pictures’ also showed us how they were feeling.  Art, although upset with life, is consumed with his final plan and the $8,000 he’s carrying around in a gym bag whereas Marion is afraid of the future because of the past.  O’Nan’s empathy with and understanding of his character’s feelings, of their confusion and fear, brings Art and Marion to life for us.  As the novel moves towards the end, we find we’re invested in what’s happening with Art and Marion and wonder where they will end up.  Although it seems as if little has happened in The Odds, quite a bit has actually happened.  I found it difficult to close the book on Art and Marion and have found myself thinking of them frequently since I finished the book.  I know many bloggers have read this book but if you haven’t, I highly recommend it.
Posted by Unknown at 11:43 AM