The Lost Daughter by Elena Ferrante 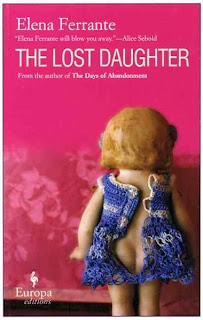 The Lost Daughter by Elena Ferrante


Book Summary:    From the author of The Days of Abandonment, The Lost Daughter is Elena Ferrante's most compelling and perceptive meditation on womanhood and motherhood yet.  Leda, a middle-aged divorce, is alone for the first time in years when her daughters leave home to live with their father. Her initial, unexpected sense of liberty turns to ferocious introspection following a seemingly trivial occurrence. Ferrante's language is as finely tuned and intense as ever, and she treats her theme with a fierce, candid tenacity.


My Thoughts:   Though this is a very short book, only 128 pages, it’s an intense story.  Elena Ferrante has eschewed a plot in favor of a character study of Leda, the protagonist, who is an emotionally complicated and layered woman.  She’s spending a week at the beach, alone.  She is a professor of literature and is looking forward to having time to work, read and relax, without interruption.  Her two daughters have moved to Canada to live with their dad. Leda, unlike other mothers who might find themselves in the same situation, is not upset by this.  In fact, she says:

“When my daughters moved to Toronto, where their father had lived and worked for years, I was embarrassed and amazed to discover I wasn’t upset; I felt light, as if only then had I definitely brought them into the world.  For the first time in almost twenty-five years I was not aware of the anxiety of having to take care of them.”

During the course of the week, as she thinks about the past and her relationship with her daughters, Leda occasionally believes she might be missing them but, ultimately, she decides she isn’t.   Within the first few chapters there’s a feeling of arrogance surrounding Leda and a feeling of superiority over others that permeates the story.  I think it comes from her education and her close work with professors, an achievement of which she has a lot of pride.  Leda’s career is very important to her but she doesn’t appear to have balanced career and motherhood very well.


Leda’s feelings, it turns out, are much more complicated and layered than she implies.  As the story progresses, Leda spends a lot of her time thinking about her relationship with her mother and her childhood as well as her own daughters.  Although she may not actually miss her daughters, Leda harbors some deep feelings of guilt related to their upbringing.  Leda eventually reveals the truth of her relationship with her daughters and the deep pain she’s ignored for years relating to her own mother’s behavior when Leda was just a child.


Leda’s prompted to delve into her past while observing, on the beach each day, a young mother and her daughter who are part of an imposing large, Italian family, also vacationing at the beach.  Elena Ferrante links Leda to this family by making them feel familiar to Leda.  The family of parents, grand-parents, in-laws, children, cousins and so on, reminds Leda of her own large family when she was a girl.  As Leda watches this family on the beach, she imagines mingling her own family members in with theirs.  This prompts her to think back to her days as a young girl.  Leda provides us with a good view of her childhood and a family she found ghastly.  But, for all her protestations, her family doesn’t sound all that bad to the reader as a neutral third party.  It’s possibly Leda’s trying to justify her behavior towards her own daughters.  It also seems quite possible Leda simply doesn’t like people very much.  She has a knack for sabotaging new relationships, liking a person one day, detesting them the next.


The Italian family on the beach, like her own family, irritates Leda.  But she cannot seem to keep to herself and ignore them, much as she wants to.  She, eventually, finds herself talking with them.  Leda becomes extremely interested in the young Nina and her daughter, Elena, who are part of the family but also appear to be on their own.  Leda obsessively watches mother and daughter, their close connection, their need for no one else.  Again, being reminded of her own childhood, Leda describes a difficult and painful time with her erratic mother.  I had a lot of sympathy for Leda and was impressed that she got away from her family and worked hard to make a good life for herself.  But when she thinks about her own upbringing and her mother, Leda often seems to forget what she put her daughters through when they were growing up.


The more I learned about Leda, the less I liked her.  I felt sorry for her at first but halfway through the book it became pity.  She’s a fascinating woman but contemptible.  She has confused and varying feelings about her daughters. One minute she loves and cares for them, the next she’s complaining bitterly about them.  Leda’s also difficult to trust because she changes her mind so frequently, she flits back and forth, unable to decide what she really thinks and feels about anyone or anything. But she’s honest about how she feels and what she thinks at a given point and tells us so.  Her honesty is often harsh, angry and delivered with blunt force.  Her interest in Nina and Elena grows hot and cold.  It also brings out some very unattractive behavior in Leda who doesn’t fully grasp how badly she’s behaved.  I’m not going to reveal what Leda does since it’s a central issue in the story.  Leda also speaks openly about her terrible behavior when her daughters were small, failing to grasp how awful it was.   She really has no right to complain about their lack of respect for her after what she put them through. Leda’s a selfish, self-centered woman who does what she wants, often at the expense of others.  I was surprised and shocked by some of Leda’s behavior.  It’s really despicable especially since Leda isn’t ashamed or embarrassed by her behavior.


The Lost Daughter is as quick a read as you want it to be.  The lack of any real plot makes it easier to put the book down and pick it back up at any point.  I usually took a break when I needed to get away from Leda for a bit.  She always drew me back to the story, although, for her honesty and with the hope she might redeem herself and become less self-centered.  One other thing kept me returning to this book: Ferrante’s beautiful writing.  It’s subtle and simple and so elegant even when Leda is at her most angry and biting point.  I’ll share a little bit here:

“How many things did I scream at her that it would have been better not even to think. I wanted – now that I had come back – my daughters to depend only on me.  At times it even seemed to me that I had created them by myself, I no longer remembered anything about Gianni, nothing intimately physical, his legs, his chest, his sex, his taste, as if we had never touched each other. When he went to Canada, that impression hardened, that I had nourished the girls only on myself, that I sensed in them only the female line of my descent, for good and ill. So my anxieties increased. For several years Bianca and Marta did badly in school, obviously they were upset. I got mad at them, pushed them, harassed them.  I said: what do you want to do in life, where do you want to end up, do you want to go backward, degrade yourselves, abolish all the efforts your father and I have made, return to being like your grandmother, who got no farther than elementary school. To Bianca I murmured, depressed: I’ve spoken to your teachers, how you’ve embarrassed me. I saw them both going off track, they seemed to me more and more pretentious and ignorant. I was sure that they would fail in their studies, in everything, and there was a period when I relaxed only when I knew they had been disciplined; then they began to do well at school and the shadows of the women of my family vanished.”

Ferrante has written a complex and mesmerizing story of motherhood, of being a woman and the choices one has to make.  Looking back on her life, Leda wonders about her choices, justifies them, but whether or not she’s satisfied with them is difficult to say.  I highly recommend this book to all readers, even those who don’t read character studies.  This book is worth reading, it’s intelligent, mystifying and compelling.


I won this book from Diane at Bibliophile by the Sea and I cannot thnk her enough for it.  I’m only sorry it took me so long to read. I hope it doesn’t take me as long to read Elena Ferrante’s The Days of Abandonment.
Posted by Unknown at 12:59 PM