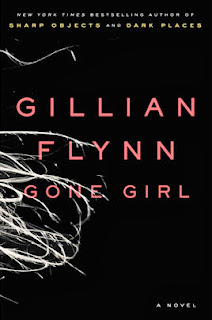 
Book Summary:   Marriage can be a real killer.


One of the most critically acclaimed suspense writers of our time, New York Times bestseller Gillian Flynn takes that statement to its darkest place in this unputdownable masterpiece about a marriage gone terribly, terribly wrong. The Chicago Tribune proclaimed that her work "draws you in and keeps you reading with the force of a pure but nasty addiction." Gone Girl's toxic mix of sharp-edged wit and deliciously chilling prose creates a nerve-fraying thriller that confounds you at every turn.  (I purposely didn’t include the rest of the summary and I explain why in my review. If you’d like to read the rest, look up Gone Girl on Goodreads or visit Gillian Flynn’s website)


My Thoughts:   When Nick Dunne and Amy Elliott meet they’re instantly attracted to each other and intrigued by one another.  Nick’s dazzled by Amy’s beauty and delighted with her personality.  Amy thought Nick was adorable.  When Nick was around Amy, he couldn’t take his eyes off of her.  Nick doted on her which she enjoyed.  Amy wasn’t one of those women who insisted her social life was Nick’s social life.  Nick went out with his friends and work colleagues, frequently.  Amy didn’t begrudge him plenty of time in front of the TV.   And she didn’t hang all over him at parties, eagle-eying his behavior.  Nick could mingle with and speak to whomever he wished when they went out together.  Amy was the type of woman many guys imagine meeting and marrying but rarely do.  She may not have been perfect, but she was a little too good, and too unusual, to be true.  Nick didn’t notice this, of course.  Nick was happy with Amy in his life.  He was in love with the Amy he saw everyday.  As a result, Nick was on his best behavior, the kind of guy many woman would love to be with.  After Nick and Amy married, they remained the same people they were before marriage, unlike many couples who relax their characters and end up displaying unpleasant and unappreciated traits and behavior hidden from view prior to the wedding and the “honeymoon period”.


To Nick’s utter dismay, his marriage had a honeymoon period; just longer than most at 2 -3 years.  But when the Dunne’s marriage went bad, it crashed and burned.  By their fifth anniversary, when the story of Nick and Amy Dunne begins in earnest, they’re barely speaking a civil word to each other.  On the day of their fifth anniversary, all hell breaks loose and pure insanity pervades the world of the Dunnes.  I’m not going to divulge what any of the craziness is.  I read this book without any knowledge of the story or characters.  I think it was the best way to read this story.  I was completely unaware of what happens to the Dunnes or how nutty and bizarre things become in Amy and Nick’s life.  And things become nasty, painful and frightening.


Flynn has an amazing creative mind. Gone Girl is divided into three sections. Each section has its own plot within which there are twists and turns, shocks and surprises and complex ideas.  In addition, the story is also very funny at times and completely entertaining.  Flynn has done an incredible job developing Nick and Amy into real people.   Although I can’t relate to or sympathize with either of them, Flynn does a very good job helping the reader understand why Amy is such a crazy, manipulative woman and why Nick needs everyone’s approval.  The secondary characters are also recognizable and some, such as Andie, are amusing, especially when described by Amy.  Flynn’s writing is exceptional and thoroughly enjoyable.


I was completely hooked on this book until about halfway through the second section.  I felt at that point the story became a little ridiculous, out-of-control and predictable for most of the remainder of the story.  I was also aggravated by some of the characters, although that’s not necessarily a bad thing.  And, even though I expected much of what happened in the rest of the story, the writing was still wonderful, certain characters were still their delightfully nutty selves and I was still being thoroughly entertained.  Things could be much worse!  So, although I preferred the first part of the book, I never considered putting Gone Girl down for good before I finished it.


I highly recommend this book to anyone who hasn’t read it.  I’m looking forward to reading Gillian Flynn’s other books: Dark Places and Sharp Objects.
Posted by Unknown at 2:27 PM